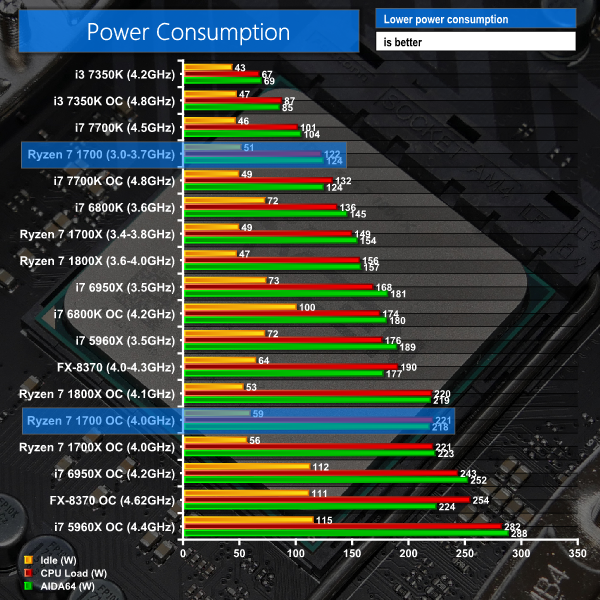 Power consumption from the stock-clocked Ryzen 7 1700 is superb thanks to its voltage being reined in to hit the 65W TDP target. All of the Intel HEDT chips that we tested drew more power under load than the Ryzen 7 1700, despite being outperformed by AMD’s part in many scenarios. Compared to the other Ryzen 7 SKUs, the 1700’s 30W reduction in TDP translates closely into the power draw decrease observed.

Temperature recordings were taken using the Noctua NH-D14 for the LGA 1151 test system, Cryorig R1 Ultimate for the LGA 2011-3 system, and Noctua NH-D15 for the AM4 system. We use different coolers for speed purposes. Each CPU cooler’s fans were running at full speed. Ambient temperature was maintained at around 20°C.

Due to the use of slightly different CPU coolers, our temperature measurements should only be used as a guideline. Performance differences below around 3°C are small enough to say that cooling results were similar. 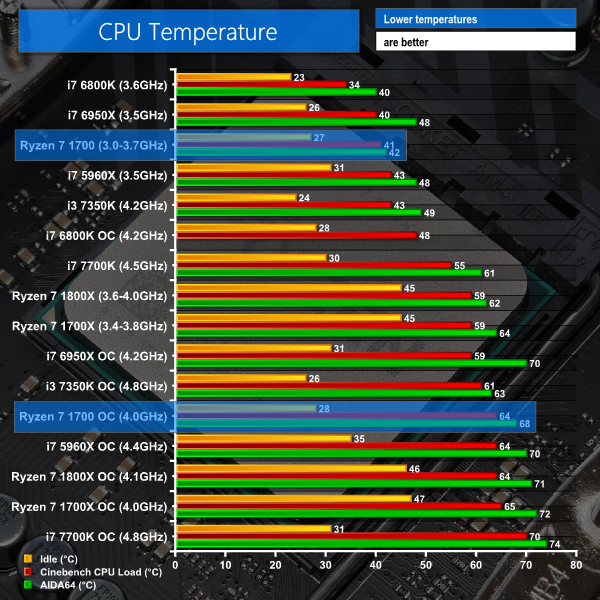 Thanks to its low power draw and superb heatspreader design, which uses solder and a liquid-metal TIM, Ryzen 7 1700 shows excellent temperature performance at stock. There have been suggestions that AMD’s temperature-reading sensor is inaccurate, which has an influence on our analysis. However, limiting the comparison to other Ryzen 7 chips, the 1700 still shows excellent thermal performance.

When overclocked using a load voltage of 1.395-1.417V, our Ryzen 7 1700 sample operated similarly to the 1700X. Variations this small are too close to declare anything other than tied performance between the pair. Assuming that the mid-to-high-60s temperature reading for Ryzen 7 1700 is accurate, based on AMD’s sensor design, I would have no worries about operating under these temperature levels for extended usage periods. 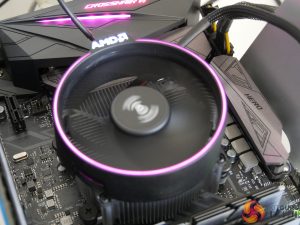 We did a quick batch of testing with AMD’s included Wraith Spire RGB cooler and found it to be a decent unit. At the stock voltage, which drops to around 1.09V on our chip under load, Wraith Spire comfortably kept our CPU cool at full fan speed (around 2700 RPM). The 1700 operated at 32°C idle, 49°C under Cinebench multi-threaded load, and that increased to just shy of 60°C after five minutes of AIDA64 CPU stress test.

We applied an overclock to 3.7GHz which used a core voltage of 1.373V under heavy load. This was a little too far for the Wraith Spire as it ran at 33°C idle, 70°C Cinebench load, and 94°C after five minutes of AIDA64 CPU stress test. 94°C is too high, even for a stress test, so we would recommend backing down to less than 1.36V if you plan to use this cooler for short loading periods or less than 1.35V (perhaps lower depending on your case cooling) for sustained heavy load.

Even at around 2700 RPM, the cooler was far from obtrusively loud. It was certainly audible but didn’t strike me as annoying, especially compared to something like a 240mm AIO under any type of heavy load. The top-down design also has the benefit of providing some airflow to the nearby VRM components on a motherboard.