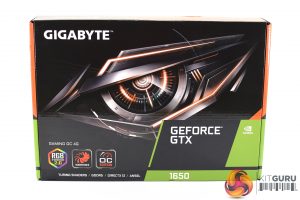 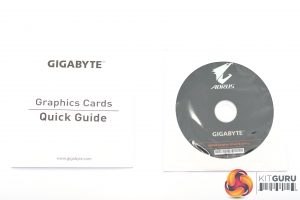 The Gigabyte GTX 1650 Gaming OC 4G ships in a familiar-looking box – if you’ve seen any of our other Gigabyte graphics card reviews from this generation, you will instantly recognise the robotic eye that dominates the front of the box.

Inside, accessories are kept to a minimum, with just a single quick-start guide and a driver disk included in the box. 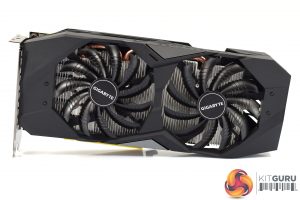 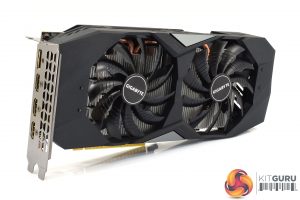 The card is what we are here for, though, and it again looks pretty much in line with what we have come to expect from Gigabyte’s current generation of graphics cards. It’s got a matte black plastic shroud with just a couple of grey accents on the front, but overall it is very colour neutral – though not particularly exciting to look at.

The two fans measure 100mm in diameter , and these use Gigabyte’s ‘Alternate Spinning’ technology, meaning both fans spin in different directions. Gigabyte says this should reduce air turbulence and thus increase overall airflow pressure. Both fans will also stop spinning when the GPU is not under load. 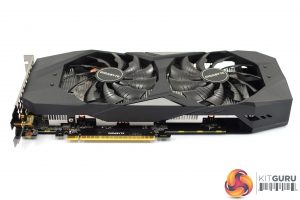 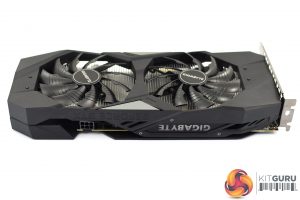 As for dimensions, the Gaming OC 4G is probably going to be one of the bigger GTX 1650s on the market – I’d expect most to come in a bit shorter as there are a lot of single-fan solutions. It’s still not massive, though, with dimensions of 265 x 118 x 40mm. That means this is a standard dual-slot design and is likely to fit in the majority of cases on the market. 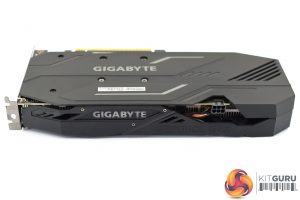 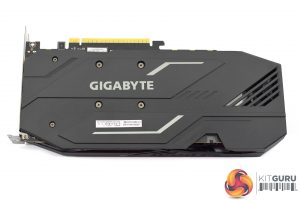 The front side of the card is again relatively plain, though there is the addition of RGB lighting to the simple Gigabyte logo on the front – but that is the only RGB zone on the card.

We also find a simple backplate which is made of plastic, meaning it is really just for structural support and improved aesthetics – this won’t help with any heat dissipation. Still, any backplate is better than no backplate in my opinion. 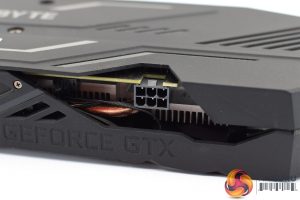 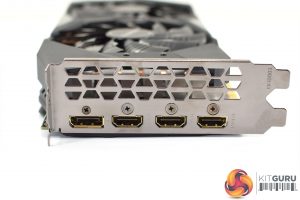 We’ve already mentioned this Gaming OC 4G does ship with an additional 6-pin PCIe power connector, though there will be plenty of other models on the market which can draw all the required power through the PCIe slot, including Gigabyte’s own Mini ITX GTX 1650 SKU.

Display outputs aren’t anything out of the ordinary, either, with 3x HDMI 2.0b and then 1x DisplayPort 1.4. 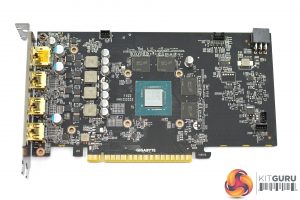 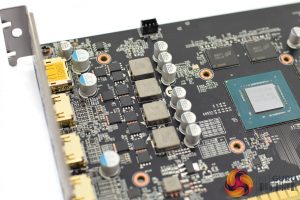 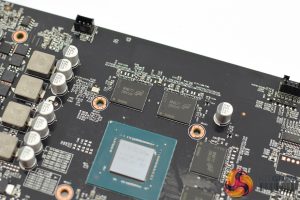 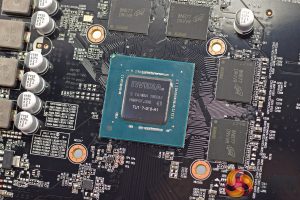 Opening up the card only requires the removal of 6 screws and then we get access to the PCB. It’s a pretty simple job but given the price-point of GTX 1650 we were never expecting an over-the-top design.

Still, it is worth noting that Gigabyte has opted for a 3+1 power delivery solution, while we also get a look at the 4 GDDR5 memory chips that are supplied by Micron – each chip is labelled ‘8NB77D9VVR’. 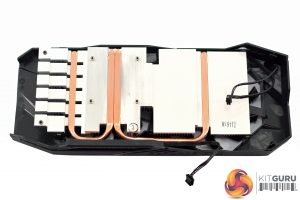 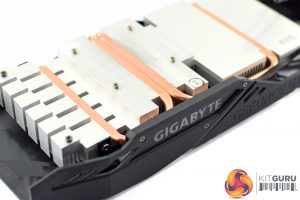 Looking at the heatsink, this is again a basic unit – but given the GTX 1650’s low TDP, high-end coolers are really not necessary. Gigabyte has opted for two 6mm composite copper heatpipes, and these snake through a compact aluminium fin-stack. It certainly doesn’t look like much, but considering some of the cooling solutions I have seen for GTX 1660 Ti which worked perfectly well, I have no doubts this cooler will be enough for GTX 1650.