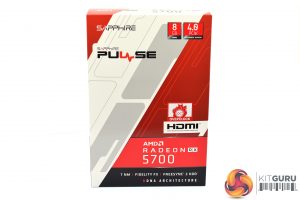 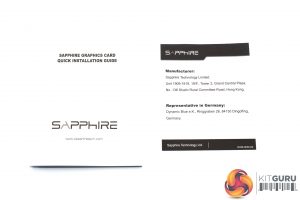 The Sapphire RX 5700 XT ships in a red, white and grey box with prominent AMD branding in the bottom right corner. There’s no image of the card itself on the front, but the Pulse logo is positioned in the top left corner of the box.

Inside, accessories are kept to a bare minimum, with a quick installation guide alongside a manufacturer’s note. 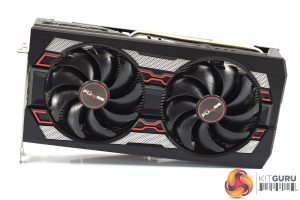 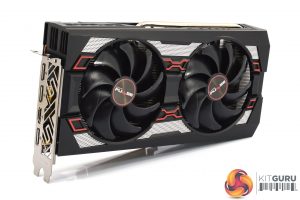 As for the card itself, it looks like a conventional graphics card. The first thing I noticed about the shroud is its plastic construction which can feel quite flimsy in some areas, especially on the sides of the card. It’s not the end of the world as once the card has been installed in your case, it doesn’t matter so much – but it’s not the best first impression for the Pulse.

While most of the shroud is black, there are also some silver and red accents on the card which I personally quite like, but it is interesting to see this approach given the older Pulse cards were entirely matte black. Most cards these days are moving towards entirely colour-neutral shrouds, and you can pick a colour of your choice via RGB lighting. Sapphire has bucked that trend somewhat with this design.

We also get a look at the two fans on the front of the card. These form part of the ‘Dual-X’ cooler, and each fan measures 95mm across. As has become standard for Sapphire cards, the fans also support Quick Connect, which means each fan can be individually removed by taking out just one screw, which would make user repairs or RMAs significantly more straightforward. 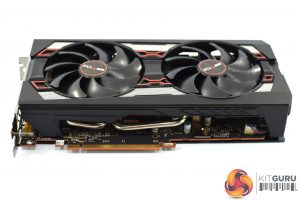 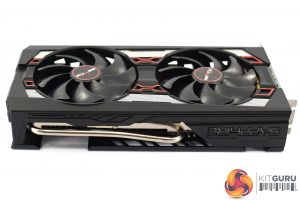 On the sides of the card, we can see some exposed heatpipes – two running above the PCIe connector, and one on the opposite side.

It’s also worth touching on dimensions of this card, as while it is not particularly long, it is quite tall – official dimensions come in at 254(L)x 135(W)x 46.5 (H)mm, so it’s a good inch-or-so taller than the PCIe bracket itself. I would still expect this to fit in pretty much any mATX or ATX case, but it may be butting up slightly closer to your side panel than whatever card you have installed at the moment. 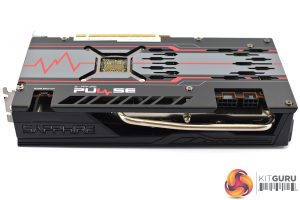 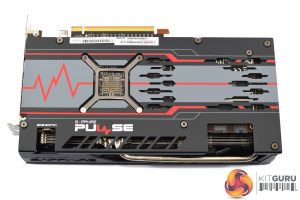 On the front side of the card, there is a relatively small Sapphire logo, just to the left of the exposed heatpipe. This is the sole RGB zone on the card, which you can control through Sapphire’s TriXX software. At the time of writing, I was only given beta software which did not have any way of controlling the lighting, so it stayed a static red, but Sapphire is still working on the software and acknowledged it does not yet have all the expected features.

Just above the Sapphire logo, it is also worth pointing out the dual-BIOS switch. By default, the card ships with the ‘Boost’ BIOS engaged, but you can enable the secondary ‘Silent’ BIOS if you want.

As for the backplate, this is made from aluminium and covers the length of the card, with a cut-out behind the GPU-core. There’s more grey and red accents here, with the ECG graph positioned on the left hand side which fits in with the Pulse name. 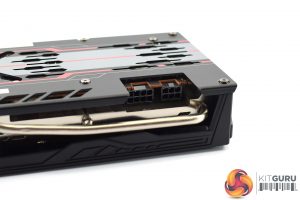 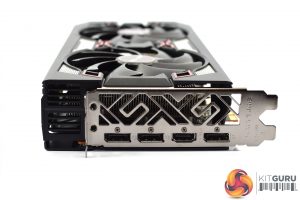 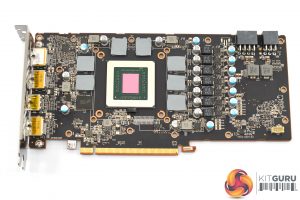 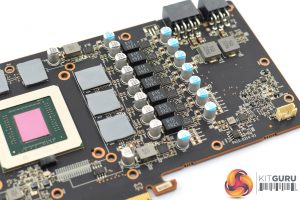 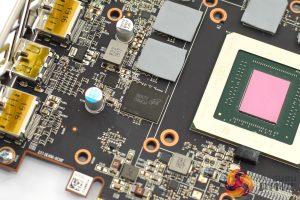 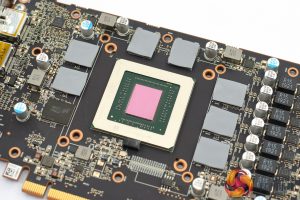 Taking off the cooler we get a proper look at the PCB. This is a custom modified board, and while it may not be completely reworked versus the reference PCB, Sapphire hasn’t just taken a reference design and slapped a cooler on it.

The most notable change is the to power delivery with Sapphire opting for a 7+2 phase design, meaning an extra phase for the GPU versus the reference board. As for the memory, the GDDR6 here is supplied by Micron, and each chip is labelled ‘9KA77D9WCW’. The relatively small Navi GPU is also on show, with no markings on the die itself. 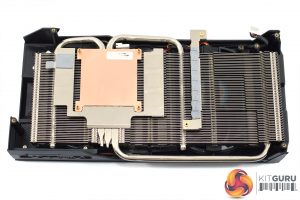 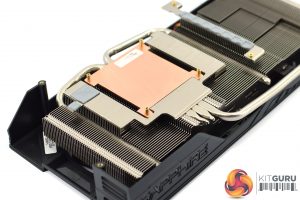 As for the heatsink, this uses a single aluminium fin array with a total of 3 heatpipes, with each heatpipe measuring 6mm. There is also a copper coldplate to contact with the GPU die itself, while another coldplate is used to cool the VRAM chips. Lastly, one final coldplate is also positioned towards the right-hand side of the cooler, to cool the MOSFETs.