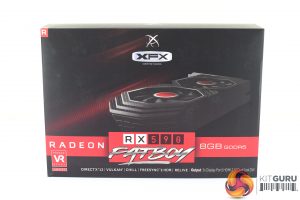 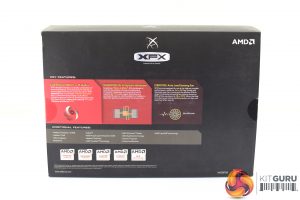 The XFX RX 590 Fatboy 8GB ships in a pretty bare-bones black box, with an image of the card on the front alongside the AMD Radeon branding.

On the back of the box, three key features – the 100mm fans, composite heatpipes and zero dB mode – are highlighted, along with other Radeon features like Freesync and Chill. 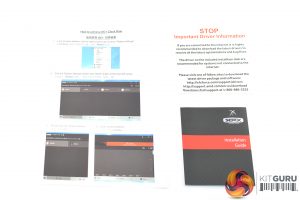 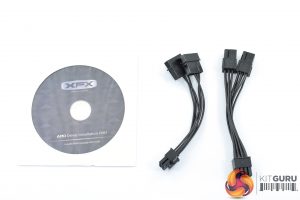 There’s a few included accessories, with a quick-start guide, an overclocking ‘how-to’ and and a note saying not to use the included driver disk being the first things we came across. 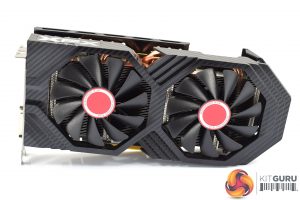 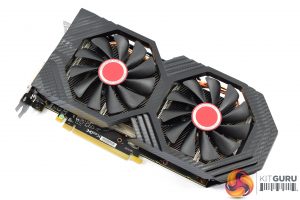 That just leaves the Fatboy itself, and I have to say it is a pretty basic looking card. It’s essentially all made from black plastic, though the shroud is decorated with a carbon fibre look which isn’t fooling anybody. The plastic also has some extras ridges to add visual interest, but overall I don’t think it is much to look at.

Most of the front of the shroud is taken up by the two 100mm fans which have a red central hub. The blade design is fairly straight and does remind me of ASUS ROG’s last generation of Strix coolers. As already mentioned, the fans also stop spinning when there is little or no load placed on the GPU. 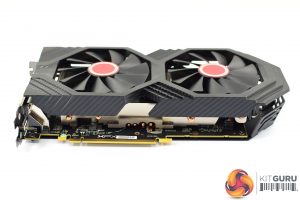 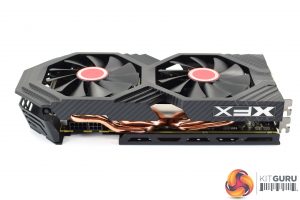 Getting a look at the card from both sides, I have to say it is really not that big. It measures 270 x 124 x 53mm, making it pretty average in terms of size. If this is what we are calling a ‘fatboy’ now, I wonder what that makes the likes of the Palit RTX 2080 GameRock Premium, or the ASUS ROG Strix RTX 2080 Ti… 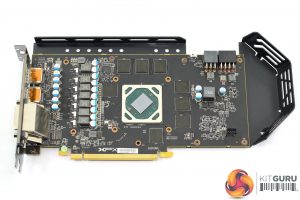 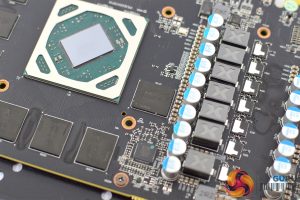 When we open up the card, too, we can also see that the actual PCB is a fair bit shorter than the shroud of the card. I measured the shroud to extend an extra 4.5cm from the end of the PCB, and hardly any of that space is even taken up by the heatsink, so it would seem XFX has decided to make the card longer for no real reason.

Still, looking at the PCB itself, we can see it uses 6+1 power phases set on the left-hand side of the board – the Sapphire RX 590 also went with a 6+1 phase design. The 8GB of GDDR5 memory comes from Micron, and each chip is labelled ‘8HB77D9VVR’. The GPU die itself is left unmarked. 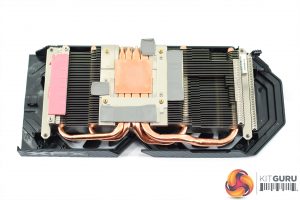 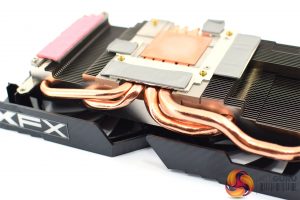 In terms of the heatsink, again I have to say it looks pretty basic and doesn’t really live up to the Fatboy name – though the proof is in the pudding as they say, and we look at thermals later in the review.

Still, what we can see here is a four heatpipe configuration, with what looks to be 2x 8mm and 2x 6mm pipes used. These feed out from a copper coldplate which contacts with the GPU die, while there is also a separate plate for the VRAM chips, and another smaller plate at the far end for the inductors. 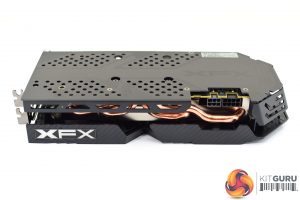 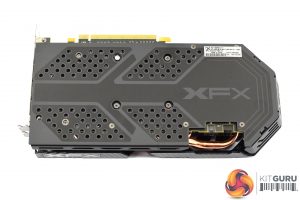 Moving back round to the front side of the card, we can see the XFX logo is stuck onto the bottom of the shroud via a sticker which could be easily removed if you didn’t want it there.

In terms of the backplate, this is made of aluminium and it sports a two-tone design, with some black and dark grey sections, while the XFX logo is present at the end of the card. Overall, though, it is relatively easy on the eye and won’t cause any issues in a colour coordinated build. 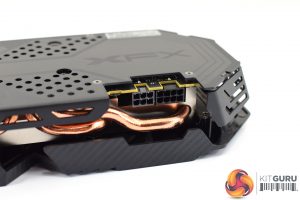 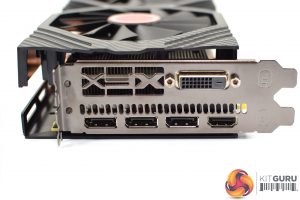 Also on the front side of the card we see the 1x 6-pin and 1x 8-pin PCIe power connectors. Just to the left of those, too, is a small BIOS switch which enables users to choose between the ‘performance’ or ‘stealth’ BIOS, each of which maintains clock speed at 1580MHz but adjusts the fan curve. This is something we test later in the review.