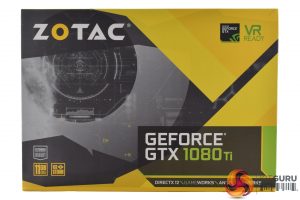 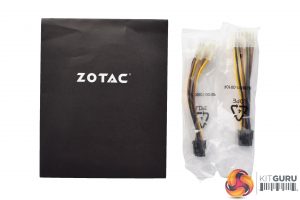 Zotac is well known for its yellow products and boxes, and the GTX 1080 Ti Mini box is no different.

Inside, accessories are scarce: there is a black booklet containing warranty and quick-start information, as well as two 2x 6-pin to 8-pin power adapters. 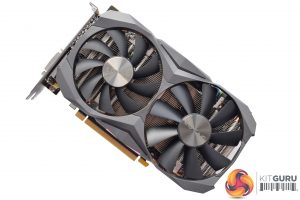 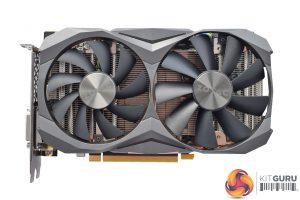 Now, moving onto the card itself, the GTX 1080 Ti Mini (or just the ‘Mini’ from here on) is an attractive piece of kit, but it is obviously very small. The full dimensions are as follows: 211mm x 125mm x 41mm. Clearly, this 1080 Ti should fit in just about any case on the market.

The shroud is made from a gunmetal grey plastic, and this colour is consistent throughout. It is not a black card, but the grey is certainly colour-neutral enough for it not to cause issues with the rest of your system should you have a particular colour scheme going on.

Elsewhere, the keen-eyed amongst you may well have noticed that the card’s two fans are not only different sizes, they also use different fan blade designs. The fan on the left (when seen from above) is 90mm and uses swept fan blades, while the fan on the right is 100mm in size and uses much straighter, flatter fan blades.

Zotac has not told me why they have done this, but my guess is that the different fans are each designed to give slightly different air pressure levels to aid cooling of the GPU core, VRMs and memory chips as well as potentially reduce air turbulence. 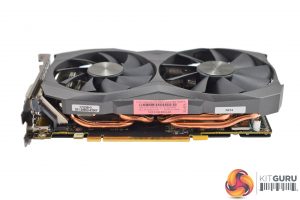 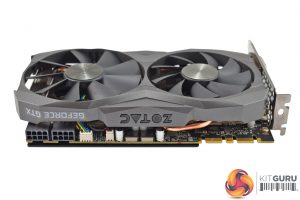 Speaking of cooling, on one side of the Mini we get a look at four copper heatpipes, all 6mm thick, while a single heatpipes is visible from the other side. That gives a total of 5x6mm copper heatpipes. The pipes themselves aren’t plated either, so the raw copper look may not be for everyone, but you won’t see the heatpipes once the card is installed anyway. 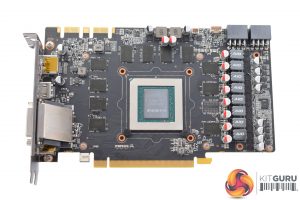 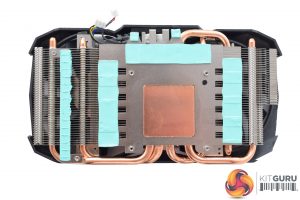 Prising the cooler from the PCB (done by simply removing 6 screws from the backplate) gives a better look at the heatpipe layout and the copper contact area. It also becomes fairly obvious that the heatsink is not large – far from it. The heatsink fins are quite densely stacked, but the card is simply too short to allow for a more sophisticated cooling solution. We look at thermals, acoustics and power consumption later in the review. 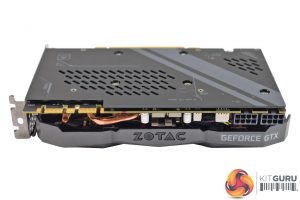 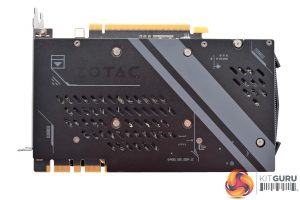 Moving on, the Mini sports a Zotac logo on its outer edge and this logo is illuminated by white-only LEDs. Interestingly enough, Zotac deliberately eschewed RGB lighting to try and keep the card as small as possible – having a RGB-illuminated logo would require an RGB controller on the card, something Zotac says would’ve required a longer PCB.

The card’s backplate is also very tasteful, with a two-tone look that retains the card’s colour-neutrality without being boring and plain. This is certainly an improvement over Zotac’s previous backplate designs – like the GTX 1080 Amp Extreme, for instance – which often featured bright yellow accents. Those designs may look good on their own, but they suit very few systems. The Mini, however, would not be out of place in any rig. 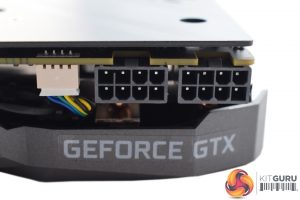 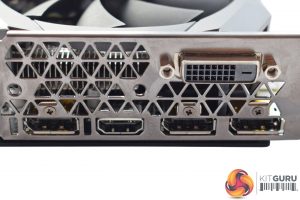 Lastly, the display connectors are worth noting: 3 x DisplayPort 1.4 , HDMI 2.0b and DL-DVI-D. The latter is obviously something Zotac decided was worth including as Nvidia ditched the DVI connector on its Founders Edition cards, but it is back here.