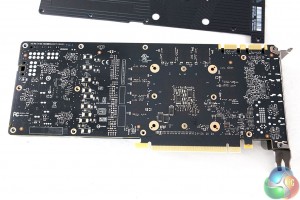 Above, the rear of the PCB with the backplate removed. 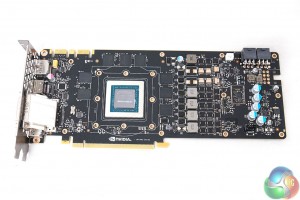 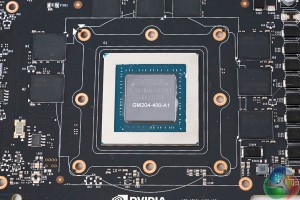 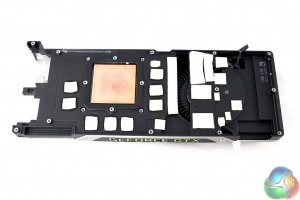 Nvidia are using 4GB of high grade Samsung GDDR5 memory on the reference card. We cleaned the thermal paste from the GPU core and GM204 markings are shown as ‘GM204-400-A1’.

Nvidia have incorporated a 4 phase power supply with overvoltaging capability. This is given the task of feeding the GM204 GPU with power. An extra power phase is dedicated to delivering power to the GDDR5 memory.

The Geforce GTX980 runs at higher clock frequencies than any other reference Nvidia card before it. They have incorporated integrated dynamic power balancing circuitry to ensure the GPU gets the power delivery evenly across all three power sources (each 6 pin connector and the PCI e slot).

With the dynamic power balancing system in place, the card will direct power from each connector when needed. If one power source is at the limit, the card will draw power from the others to balance it out. This is a feature exclusive to the GTX 980 and GTX 780 Ti. 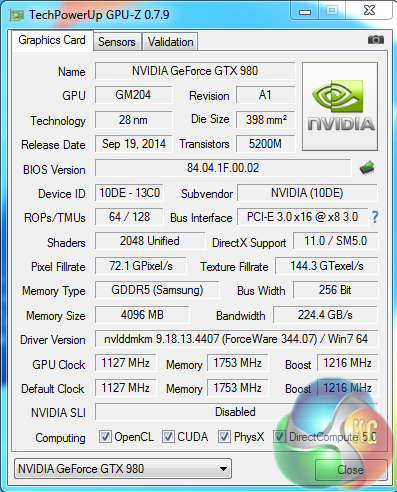 Special thanks to Mike over at Techpowerup for sending me over the latest beta version of GPUZ to fully support the Geforce GTX980. I felt like I was living in an episode of Back To The Future seeing a ‘release date’ of 19th September, when I started working on this review around the 13th.

Overclocking and testing at ‘maximum performance‘

Our review today features the reference Nvidia Geforce GTX980 against a series of overclocked custom cooled cards from Nvidia and AMD partners.

As we are only reviewing a reference GTX980 today we felt it was worthwhile to get the overclocking out of the way first – and include additional results with the card overclocked to the limit throughout the rest of the review. This should give a better indication of performance you could expect from overclocked partner GTX980 solutions when they are released to market over the coming weeks.

To overclock the Nvidia GTX980 today, we used the latest version of MSI’s Afterburner tool (Version 4.0.0), which is based on Rivatuner. 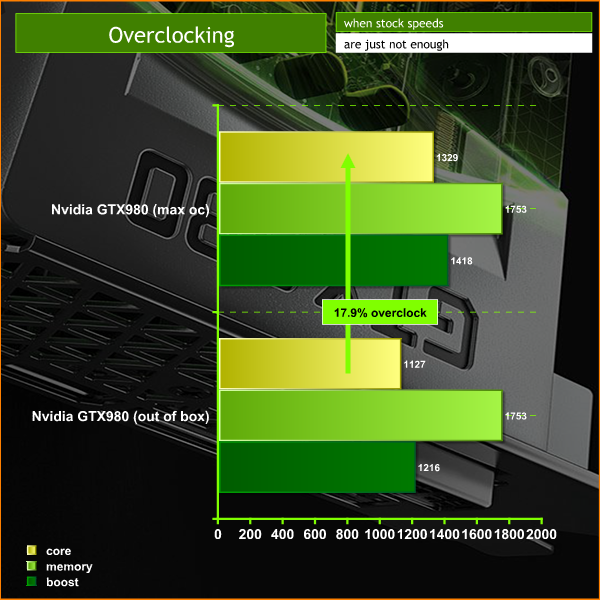 Nvidia partners are going to have a field day with the GTX980. There is clearly plenty of headroom available via the new Maxwell core. We managed to get almost 18 percent extra, hitting a stable peak at 1,329mhz with a couple of tweaks to the core voltage and Power limit settings. The Boost speed could be increased from the default speeds of 1,216 mhz to 1,418 mhz. This is a mighty overclock for a high end graphics card.

The memory exhibited a little headroom, but we left it at the default settings as it really doesn’t affect the overall scores that much and partners don’t tend to overclock memory much beyond the reference rated clock speeds anyway.