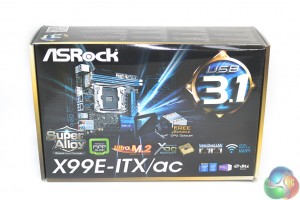 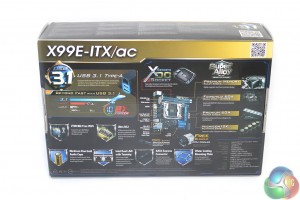 ASRock ships the X99E-ITX/ac motherboard in the company’s usual style of packaging. Specifications and features are outlined on both sides of the box. 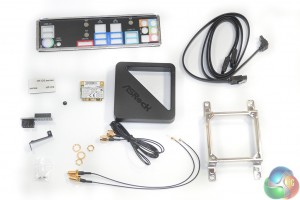 The accessories bundle consists of:

Two SATA cables seem meagre for a board of this price range – throwing in an extra pair would not have gone unnoticed. ASRock should have also included some form of front panel header block (like Asus’ Q-connector and MSI’s M-connector) in order to make attaching the small cables a simpler procedure.

The dual-band, 802.11 a/b/g/n/ac WiFi + BT 4.0, half-height mini-PCIe card is manufactured by AzureWave and uses a Broadcom BCM94352HMB chipset. It is rated for 2T2R operation with a maximum link speed of 867Mbps. The card alone seems to retail for around £30, making it a healthy addition to the board’s bundle.

The AIO mounting bracket is used to convert a standard liquid cooling pump/waterblock unit into one which can be mounted on the motherboard’s narrow ILM socket. ASRock explicitly states compatibility for the Cooler Master Seidon 120V/120V Plus CPU coolers with the AIO mounting bracket, however other units may work – we used a Corsair H100i, but more on that later. 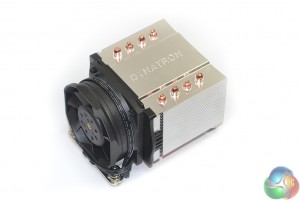 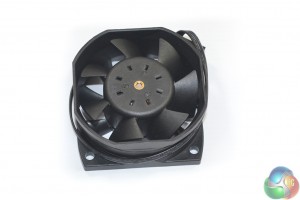 Given the relative scarcity of narrow ILM-compatible CPU coolers on the consumer market, ASRock has included a small heatsink and fan unit. The 400g Dynatron R24 cooler is rated for up to 160W of heat dissipation by using a 7,000rpm (yes, you read correctly) fan.

While this is a positive gesture to ensure out-of-the-box compatibility, I would prefer to see the few dollars this unit costs invested into additional brackets for more widespread AIO liquid cooler support.

Most people opting for the X99 platform are going to understand its cooling requirements. Even those choosing a Xeon chip that doesn’t overclock may value quieter operation or simply better cooling performance offered by a different CPU cooler. 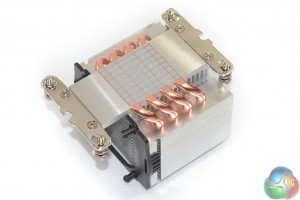 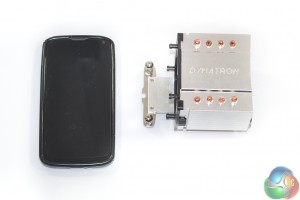 The heatsink has four heatpipes and a direct touch base. Clearly ASRock is happy enough with the cooler’s performance to include it with a motherboard designed for up to 160W TDP Xeon chips, however given its dimensions similar to a 4.7″ smartphone, I would not feel comfortable increasing voltages with this unit.

You may be able to squeeze a small speed boost out of your Haswell-E CPU with the cooler, but if you plan on overclocking (or quiet operation, for that matter), it would be wise to invest in a new CPU cooler. If you don’t fancy going down the AIO liquid cooler route, Noctua has a range of narrow ILM-capable CPU coolers, including the ~£50 NH-U12DX14. 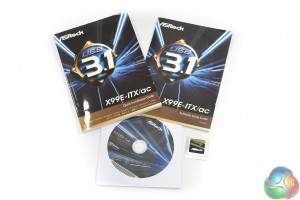 The standard affair of documentation, drivers CD, and case sticker is included.