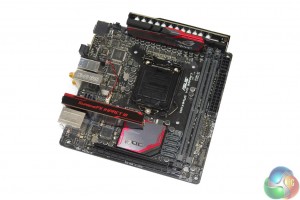 The Asus Maximus VIII Impact motherboard allows users to apply multi-core turbo (MCT) and force the 6700K to a constant 4.2GHz when XMP is enabled. This will be displayed as the ‘stock’ setting. 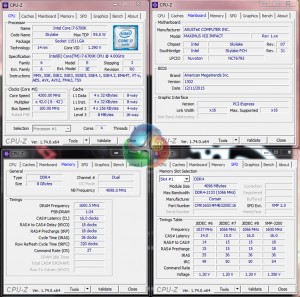 CPU-Z reports erroneous voltage readings for the CPU, so they can be ignored. Asus’ AI Suite software delivers accurate readings that we validated using a multimeter and the onboard Probelt voltage readings points.

A CPU voltage of around 1.17V is applied during heavy CPU load with MCT enabled. This level is a smart choice by Asus that results in solid stability and easy-to-cool temperatures. Competing motherboards typically opt for around 50mV higher when the 6700K’s MCT settings are enabled, so this may be an indication of the efficiency of the Maximus VIII Impact’s power delivery system.

We had to switch our test system’s usual four-stick memory installation, as necessitated by the board’s two DIMM slots. Instead of opting for a pair of 8GB DIMMs to keep the 16GB capacity constant, we used two of Corsair’s 4GB Vengeance LPX 3200MHz DDR4 sticks. This gave us 8GB of system memory and kept the DRAM frequency consistent with our competitors’ test data.

We actually had to mix up the two Corsair DRAM modules and reseat the CPU as the board was unstable when using XMP. The LED display threw up a 55 error code on POST, which seems to be a common issue for some Asus Z170 ROG boards when using XMP or high-speed memory. Reseating the CPU and using two different DDR4 sticks of the same memory removed the instability.