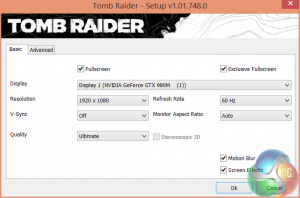 We test at 1080p with the image quality settings right at the limit.

Crazy frame rates at 1080p, averaging 131 frames per second. The SLi profile works extremely well with this engine. A higher 3k resolution panel would be a good option for MSI to add.