We leave the system to idle on the Windows 10 desktop before taking a power draw reading. For CPU load results, we read the power draw while producing five minutes’ worth of loading in the Cinebench R20 nT rendering test.

The power consumption of our entire test system (at the wall) is shown in the chart. The same test parameters are used for temperature readings. 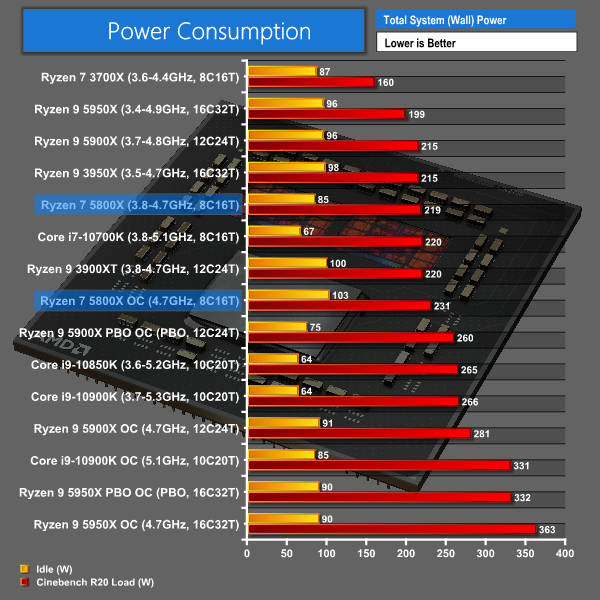 The 8-core Ryzen 7 5800X uses just about 100% of its 142W PPT allowance on our test motherboards. The caveat here is that the power budget for the 5800X is used to boost to higher operating frequencies using higher voltages than the Zen 3 Ryzen 9s. That’s why we see higher power consumption from the 16-thread chip, despite its core count deficit.

Compared to the Intel Comet Lake chips, the Ryzen 7 5800X matches the Core i7-10700K power draw but offers significantly higher productivity performance. The 5800X is closer to the 10-core Core i9-10850K in terms of performance but AMD’s part operates at around 45W lower wall power draw under load.

Overclocking to 4.7GHz adds only 12W to our measured load power draw. This is a slim increase as the eight-core chip already runs at high frequency out of the box. 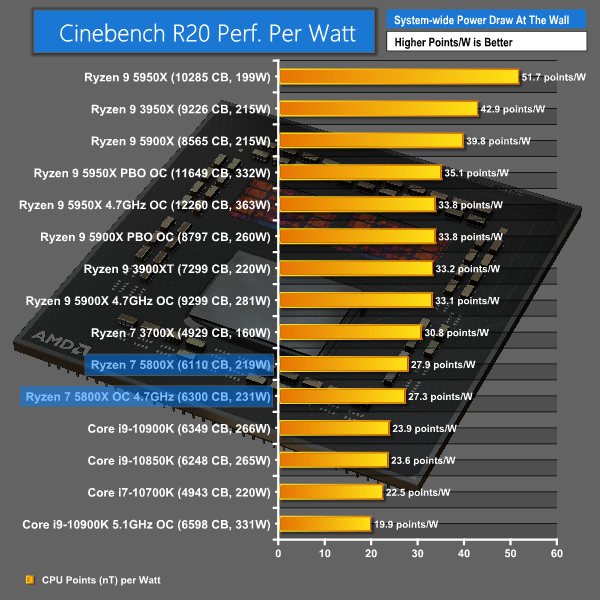 If efficiency in multi-thread workloads such as Cinebench is very important to you, the 5800X’s default operating mode leaves room for manual improvement, perhaps via AMD’s TDP-downrating Eco Mode in the motherboard UEFI. 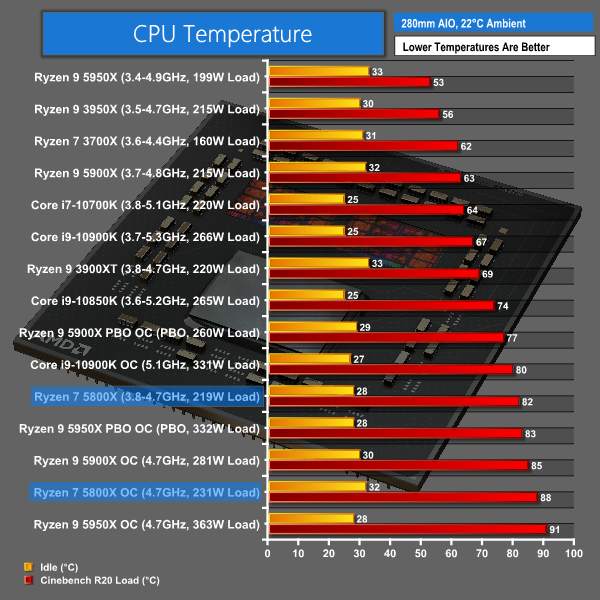 Load temperatures from the Ryzen 7 5800X were high even when placed under a 280mm AIO liquid cooler with 1600 RPM fans. This is because the chip aggressively increases voltage to achieve the higher core clocks afforded by its healthy 142W power budget.

Just over 80C under stock load conditions implies the requirement for high-end cooling. But of course, AMD’s smart Precision Boost algorithm will adjust the operating voltages and clock speeds based on the temperature readings that are dictated by the cooling capacity available.

Overclocking to 4.7GHz using a delivered voltage of around 1.32-1.34V resulted in load temperatures just shy of 90C. This is high, but there is evidently more room for better tuning the overclock voltage beyond the safe bet that we went for in our testing.

Another point worth highlighting with the Ryzen 7 5800X temperatures is thermal density. This processor outputs the majority of its power via a single 8-core CCX chiplet, rather than the dual chiplets used on the 12- and 16-core parts.

Clearly, the temperatures are no cause for concern. But it is interesting to note how thermal density looks to be affecting the temperature behaviour of the processor.