As such, we were hoping to see the new, optimised Ryzen 5000 chip operate at higher all-core frequencies when running at stock, PBO, and when overclocked. 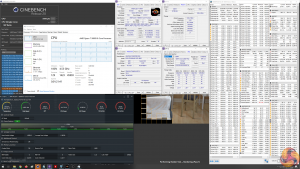 We see the 5800X hitting around 4.55GHz all-core frequency in the demanding Cinebench workload. This clock speed value holds up well using standard AIO cooling and it also highlights why the gains from our 4.7GHz manual overclock are slim.

Continuing the trend that we saw with the Ryzen 9 5000 processors, the Ryzen 7 5800X operates above its 4.7GHz rated maximum boost frequency. We observed clock values as high as 4850MHz, even if only for small periods of time. The usual maximum boost clock was around 4.75-4.8GHz on a couple of the preferred cores. 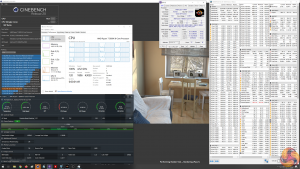 We did a quick test on PBO overclocking but found it to deliver no tangible improvements for the 5800X. This is because the processor, by default, doesn’t really push the PB2 input parameters to the point where more power will deliver significantly higher frequencies.

As such, we quickly transitioned to manual overclocking. 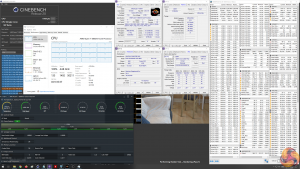 We managed to overclock the 8-core 5800X to the same 4.7GHz all-core frequency that we saw from the higher core count Ryzen 9 chips. This was using a delivery voltage of around 1.32-1.34V that we perceive as sensible from a cooling and motherboard VRM perspective.

4.7GHz all-core is a solid result and matches the noted boost frequency according to AMD’s product specification. It also implied that good quality CCXs are still being used despite the Ryzen 7 5800X’s lower positioning on AMD’s product stack. The fact that full 8-core CCXs with no cores disabled are being used also highlights this point.

As the test BIOS that we used on the ASUS motherboard is AGESA 1.1.0.0 Patch B, Infinity Fabric overclocking had issues. We tried with the Patch C BIOS update, but this Beta BIOS resulted in reduced boost clock behaviour and general performance from the CPU, so we quickly reverted to the stable Patch B revision instead.

4.7GHz from the 8-core Ryzen 7 5800X is a solid result and is around 100MHz higher than we saw from the Ryzen 7 3800XT predecessor. It also matches the all-core overclock frequency that was achieved with the higher-end Ryzen 9 5950X and Ryzen 9 5900X in our testing.