The temperature of the Devil’s Canyon CPU and power consumption of our entire test system (at the wall) is measured while loading only the CPU using Prime95′s in-place large FFTs setting.

Temperature recordings were taken using Asus’ AI Suite software. HW Monitor delivered contradictory readings that were sometimes as much as 10°C higher than the Asus software.

Temperature recordings were taken with the Corsair H100i CPU cooler’s fans running at full speed. Ambient temperature was maintained at a toasty 24°C. 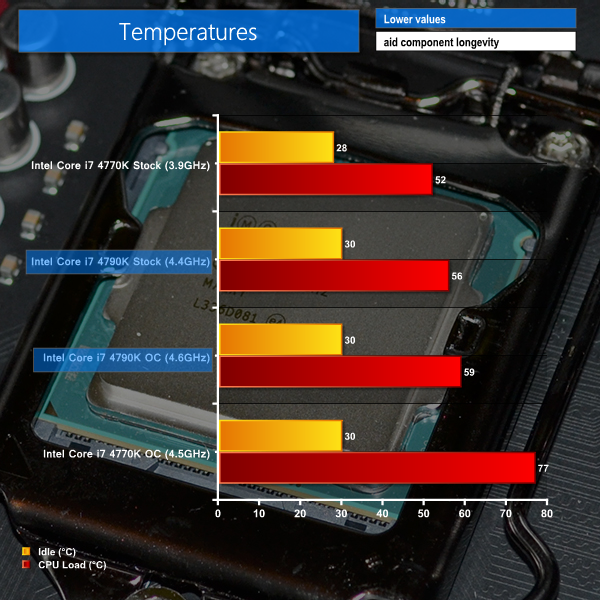 By virtue of its increased operating frequency, the 4790K uses a higher voltage level at its stock MCT speeds. The 4770K’s lower voltage level helps boost it to a stock-clocked temperature win, despite the Devil’s Canyon chip featuring supposedly improved thermal interface material.

Intel’s NGPTIM does indeed seem to be doing a stellar job at taming the Devil’s Canyon chip’s heat output. Going from a load voltage of 1.248V at stock speeds to 1.280V when overclocked only results in a 5% increase in load temperature of the CPU.

A 77°C load temperature proves that Haswell is a fiery beast when the voltage levels are cranked up (we used 1.325V in the BIOS which hits 1.360V when loaded). Thankfully Devil’s Canyon is able to pass its thermal energy over to a CPU cooler with vastly improved efficiency. 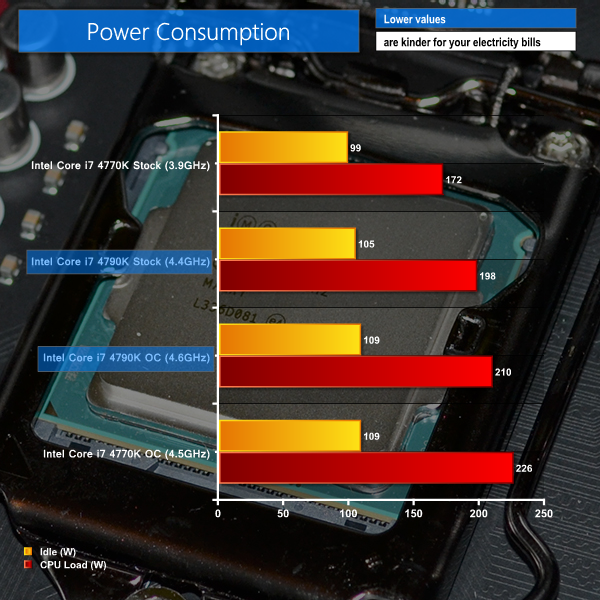 As is to be expected with its increased operating voltage, the stock-clocked Devil’s Canyon also dictates greater power delivery when loaded. The improved overclocking capability of our 4790K, in comparison to the retail 4770K, helps to reduce voltage requirements and therefore power consumption levels when overclocked.

The eagle-eyed amongst you will notice that our idle power consumption numbers for the 4770K are different to those recorded in our motherboard reviews. This is a minor issue that we are looking into and does not affect the legitimacy of the recordings displayed above (the same test system was used for all power and temperature recordings).