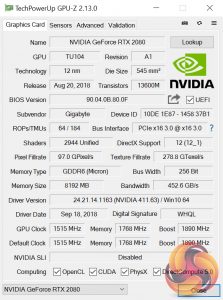 As mentioned, the Aorus Xtreme operates with a 1890MHz boost clock out of the box.