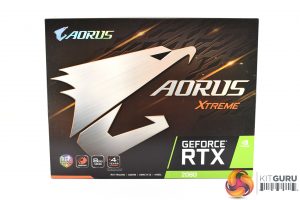 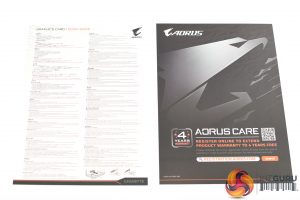 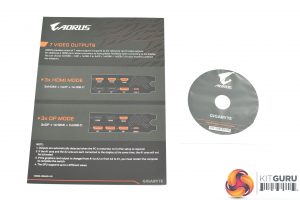 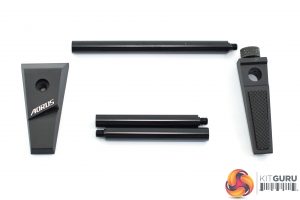 The Aorus RTX 2080 Xtreme 8G ships in a dark box with a very large Aorus logo taking pride of place on the front. There is not an image of the graphics card itself visible.

Inside, we find plenty of leaflets and user guides – there is 1x quick start guide, 1x warranty card (which provides an extra year of warranty when you register the product online), 1x driver disk and then 1x display output guide which we will get to later.

Most interesting is the small bundle of metal rods and small wedge-shaped brackets. As it turns out… 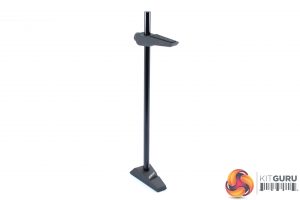 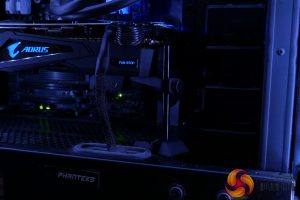 … these piece together to make a GPU support stand. The Xtreme card itself is very large and quite heavy, so Aorus includes this to prevent any sagging and potential damage to your PCIe slot. It’s certainly not the most subtle way to go about this, but I think it is much better to have it than not, so thanks Aorus for including that. 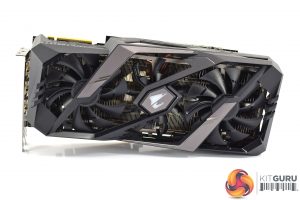 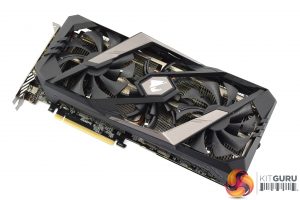 Moving onto the card itself, the front of the shroud is mostly made from black plastic, but the metallic silver sections that cross over the two outer fans is indeed made from metal. Speaking of the fans, each of the three spinners measures 100mm in diameter which is quite impressive when you consider most cards with 100mm fans only use two of them, and not three. The Gaming OC 2080 we saw from Gigabyte, which also has three fans, could only squeeze in 82mm units.

Interestingly, these also use what Gigabyte calls its ‘alternate spinning’ technology, so the central fan actually spins the opposite direction to the two outer fans. This is meant to help reduce turbulence and this increase heat dissipation efficiency. 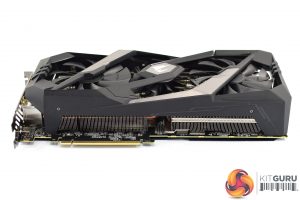 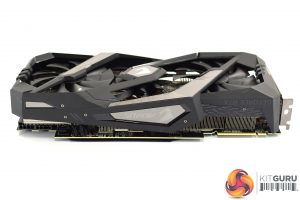 Taking a look at the card from the side, it is clearly a monster. It measures 290mm x 134.31mm x 59.9mm (L x W x H), making it effectively a triple slot card. Given this size, and its weight of 1.35KG according to my scales, it is easy to understand why Aorus included the support bracket in the box! 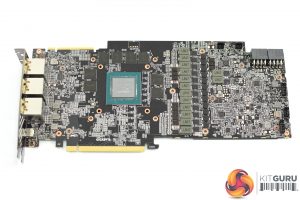 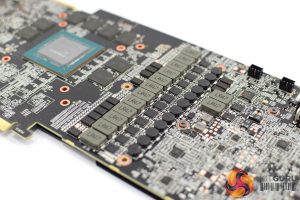 Opening up the card requires the removal of ten screws from the back of the card. This reveals a very busy-looking PCB, and the standout thing here is the mammoth 12+2 power phase design Aorus has opted for. The Founders Edition 2080, for reference, ‘only’ uses 8+2 power phases, so Aorus has clearly gone overboard which it claims should help with ‘extreme overclocking’.

Elsewhere, the 8GB of memory comes from Micron, with the chips labelled ‘8RA77D9WCW.’ The GPU is labelled ‘TU104-400A’, with the ‘A’ signifying this is a binned chip suitable to be sold with a factory overclock. 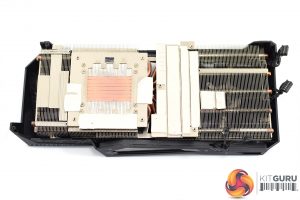 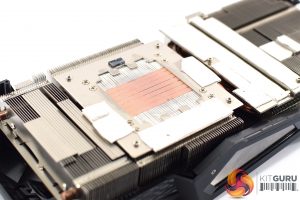 The cooler itself weighs just over 900g and uses seven copper heatpipes, each of which measures 6mm. These make direct contact with the GPU die which is an interesting decision, as I would have thought the outer two heatpipes would be making very little contact with the GPU core, thus reducing thermal transfer – but we will look at GPU temperatures later in the review.

There is a separate coldplate for the VRAM chips and VRM, though, and of course plenty of thermal pads are used here as well. 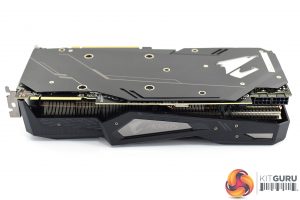 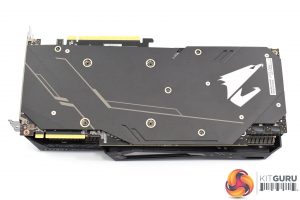 Moving back round to the front side of the card, here we find some (very) subtle GeForce RTX branding on the left-hand side, with the Aorus logo taking pride of place in the middle of the card.

The backplate is made of anodised aluminium and again features the Aorus eagle logo on the right-hand edge. 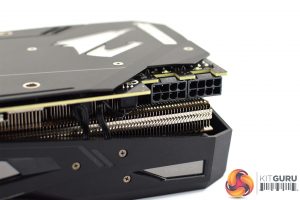 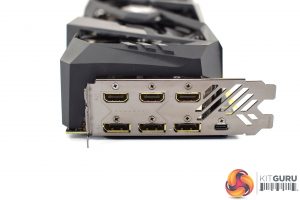 As for power requirements, the Aorus RTX 2080 Xtreme requires 2x 8-pin PCIe power connectors which is quite standard for an aftermarket 2080.

Quite unusually, though, there are a total of seven display outputs, when we typically see just five. That’s because there are no less than 3x HDMI 2.0b, 3x DisplayPort 1.4 and 1x USB-C ports. Before you get too excited, you can’t use all of them simultaneously – you are still limited to a maximum of 5 display outputs – but the extra ports give you flexibility in terms of what connector you want to use.

So if you look at the outputs above, you can see the two HDMI ports and the two DisplayPorts on the left-hand side are segregated by lines etched into the I/O bracket. Essentially, you can only use either pair – either the top HDMI ports, or the bottom DP ports. The single HDMI, DP and USB-C on the right-hand side are always active. In a nutshell, you can have 3x HDMI, 1x DP and 1x USB-C outputs or 3x DP, 1x HDMI and 1x USB-C outputs at any given time.