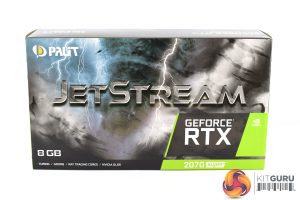 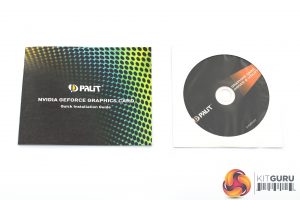 The Palit RTX 2070 Super JS ships in a visually appealing boxing, with the front designed like a lightning storm – it’s certainly eye catching.

Inside, a small quick start guide and a drive disk come included. 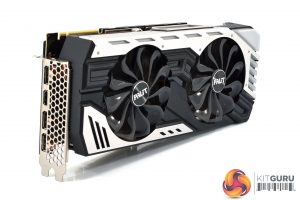 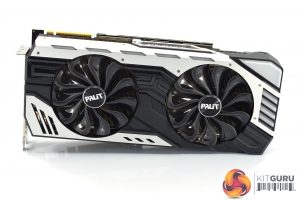 The card itself is visually almost indistinguishable from the RTX 2060 Super JS we reviewed last year, and as far as I can tell they are using the same shroud and cooler design. This means the 2070 Super JS uses a mostly black plastic shroud, though it does have two large metal plates screwed onto the plastic which add some contrast to the design.

As for the fans, these use Palit’s TurboFan Blade 2.0 design, with each measuring in at 100mm which is good to see. While there is a fan-stop mode present with the 2070 Super JS, it is only an option using the card’s secondary BIOS, so out of the box the fans do keep running even when the card isn’t under load. 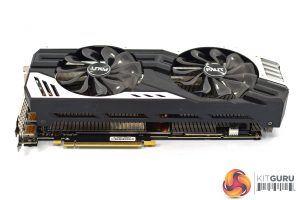 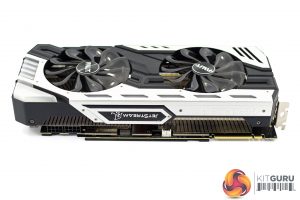 In terms of the physical size of the card, it measures in at 292 x 130 x 59.6 mmm, so it’s almost 30cm long and just shy of 60mm thick – this is certainly not for those looking to put together an ultra-compact ITX system! 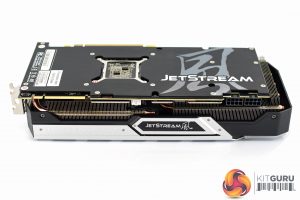 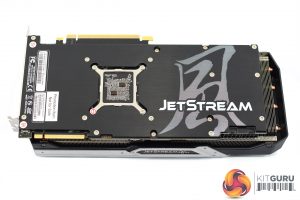 On the front side of the card, we can see the JetStream logo written in silver text, surrounded by one of those metal plates we mentioned earlier. Right next to the I/O bracket we can also just about make out the dual-BIOS switch. Here there is the choice of BIOS 1 or BIOS 2 – BIOS 1 is the ‘OC profile’ and is the default setting, while BIOS 2 reverts to reference clocks with a slower fan curve. We test both BIOS later in the review.

As for the backplate, this is a brushed metal plate with a single cut-out behind the GPU core. The JetStream logo takes up most of the right-hand side of the backplate. 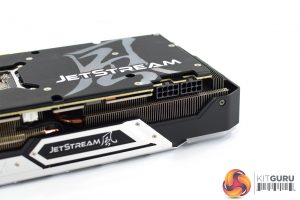 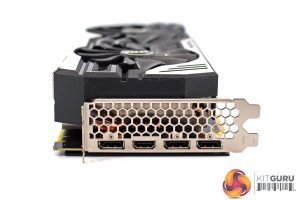 As for power requirements, 2x 8-pin PCIe connectors are needed for this card, while we can also see the standard allocation of display outputs – 3x HDMI and 1x DisplayPort. 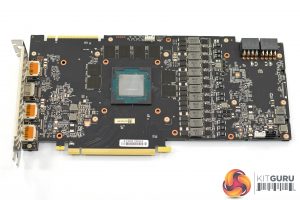 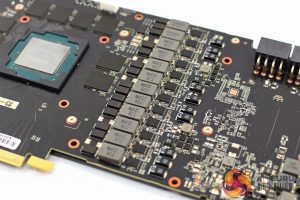 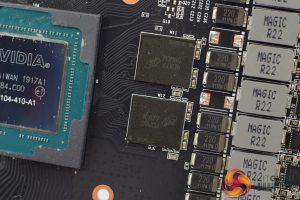 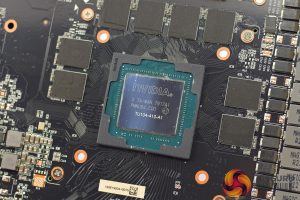 Opening up the card reveals the PCB, with Palit opting for a 10+2 phase VRM with this model – this appears to be a very similar, if not identical, design to Palit’s RTX 2080 GameRock, which of course makes sense since RTX 2070 Super and RTX 2080 both use the TU104 GPU. Memory is provided by Micron’s D9WCW modules, and the GPU die is labelled ‘TU104-410-A1’. 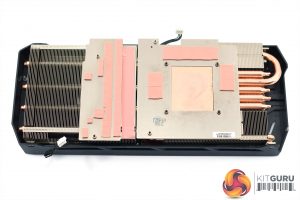 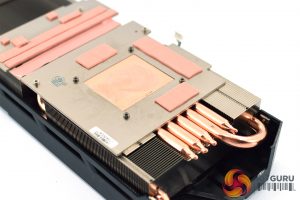 As for the cooler, once again as far I can tell this is the same unit used for both the 2060 Super JS and 2080 GameRock cards. It is comprised of two fin stacks which are connected by 5, thick 8mm copper heatpipes. The GPU die contacts with a copper baseplate, while that is surrounded by a larger plate used to cool the memory. Another separate plate is positioned to the side to cool the VRM.