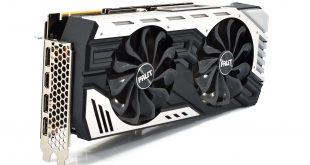 Rumours are continuing to swirl about Nvidia's plans for its next generation of GPUs, but for now Turing and the RTX 20-series remain as the company's current-gen offerings. Despite competition from AMD's RX 5700-series, Nvidia's RTX 2070 Super has proved a popular GPU around the £500 price point, and today we review the Palit JS (JetStream) model, currently retailing for £479.99.

As the bigger brother to Palit's RTX 2060 Super JS we reviewed back in July, the RTX 2070 Super JS appears to use the same shroud and cooler design as that card. As a 2070 Super, however, it obviously comes with an increased shader count, with 2560 CUDA cores compared to the 2176 cores of its little brother.

Compared to the 2070 Super Founders Edition, the Palit JS has seen a slight increase to its core clock, coming in at 1815MHz boost – a 45MHz increase over stock specifications. The memory, however, has been left alone at its stock speed of 14Gbps. Palit's cooler is also physically larger, taking up effectively three slots, while it also comes with dual-BIOS support which we always like to see. Is this card worth buying? 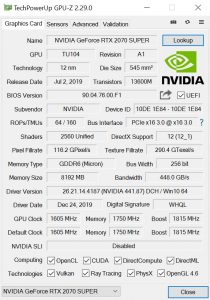 Just confirming what we touched on earlier – RTX 2070 Super uses a cut-down version of Nvidia's TU104 GPU, the same GPU used for the vanilla RTX 2080 when it launched back in September 2018. Where the full TU104 sports 48 Streaming Multiprocessors (SMs), the cut-down version used for 2070 Super consists of 40 SMs, each housing 64 CUDA cores, for a total of 2560.

Alongside that, the GPU also features 8GB of GDDR6 memory, running at 14Gbps. This is the standard speed for pretty much all the GDDR6 we have seen to-date, with the 2080 Super a notable exception as its memory runs at 15.5Gbps.