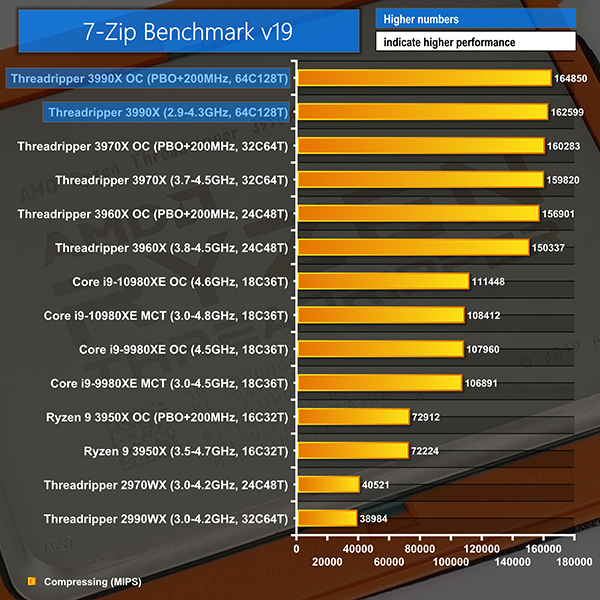 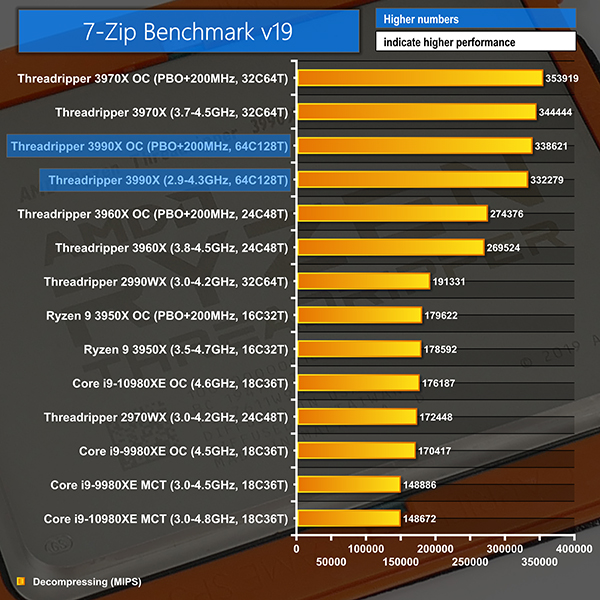 7-Zip does not make use of more than 64-threads and therefore offers no meaningful performance improvement versus the 3970X. The abilities of Precision Boost 2 mean that the 3990X increases its multi-threaded clock speed accordingly when only 64-threads are loaded, thus allowing it to run at frequencies comparable to the 32-core Threadripper.

Decompression actually runs slightly worse on the 3990X compared to the 3970X. Repeated testing on different motherboards confirmed this result, so this would look to be the first negative outcome from the 3990X’s reduction in recorded memory bandwidth.

While 7-Zip performance is no better than the cheaper 3970X, the 3990X does have half of its threads left idling while 7-Zip operates. In theory, one could load up another instance of 7-Zip, put load on those remaining 64 threads, and get double the throughput. In practise, it does not work like that. There is, however, clear capability to multitask even heavily while 64-thread limited applications are running on one processor group. 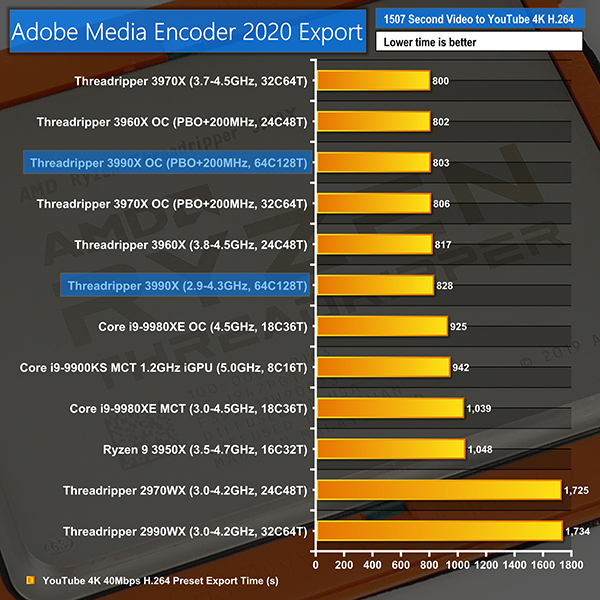 Adobe Media Encoder is another application that does not benefit from 64-cores for our test workload. That point actually extends to 32 cores, as the 3970X delivers no tangible performance uplift versus the 3960X.

As previously noted, there is plenty of computational headroom (in excess of 60%) left untapped even at the toughest points of our 4K H.264 video export. That leaves plenty of capability for the 3990X to multitask with minimal slow-down.

AMD’s testing guide highlights how more demanding workloads, such as dealing with high resolution RAW footage and H.265 outputs, stress the CPU more heavily and show some benefits for the 64-core 3990X. This is something that I will be keen to do follow-up testing on post-launch.

The key point to take from our result is that budding YouTubers or video editors shooting in 4K and dealing with H.264 exports need not run out and buy a 3990X; the 3960X is a smart choice for such workloads. 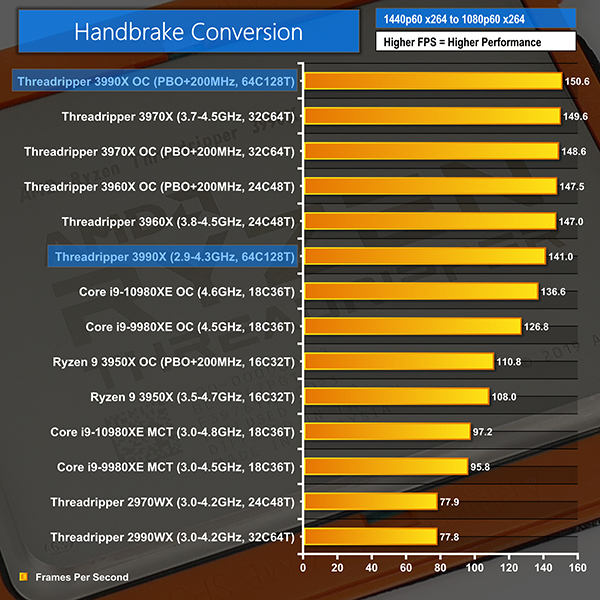 A Precision Boost 2 clock frequency deficit versus the Threadripper 3000 alternatives is to blame for the 3990X’s reduced stock performance. This is interesting and surprising but is confirmed by our data logs.

There is no reason why the 3990X and half of its threads somewhat loaded by Handbrake should be running any slower than the 3970X with the same loaded thread count.

The clear caveat is that the 3970X approaches operating frequency levels that are close to the 3990X’s peak boost clock; the 64-core chip is therefore less comfortable operating at those lofty heights even though some cores are sat idling and there is package power budget remaining. 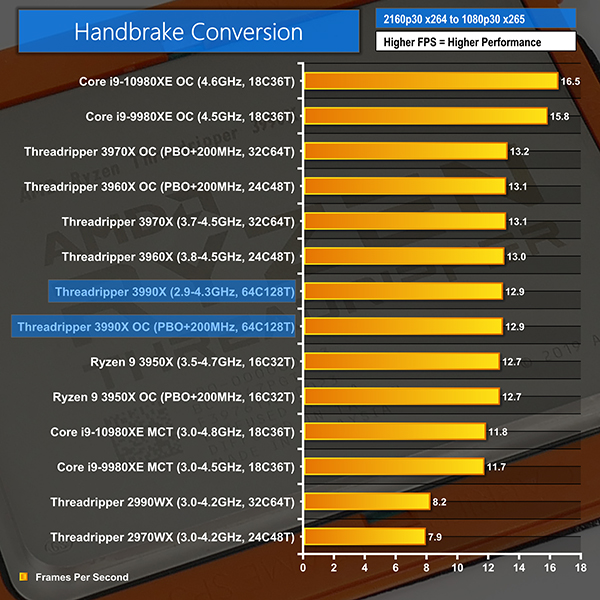 Our x265 Handbrake test shows similar behaviour whereby the 3990X is comparable to the 24- and 32-core chips. Intel HEDT parts and their fat AVX pipelines still rule the show when it comes to x265 performance in Handbrake.

Clearly, Handbrake offers up no tangible performance gains for the 3990X as it cannot address more than 64 threads. If you simply run Handbrake and step away from your system, there is no benefit from the 64-core chip. But if you convert your high-res video footage in Handbrake, whilst also exporting media from Adobe Premiere, whilst also packaging up the raw A-Roll footage using 7-Zip, maybe then the 3990X and its heavy multi-tasking capabilities will come into play.