Power draw readings are accurate to around +/-5W under heavy load due to instantaneous fluctuations in the value. We use a Titanium-rated Seasonic 1000W Prime TX-1000 PSU (with 8-pin plus 4-pin or 8-pin plus 8-pin power connectors where possible). 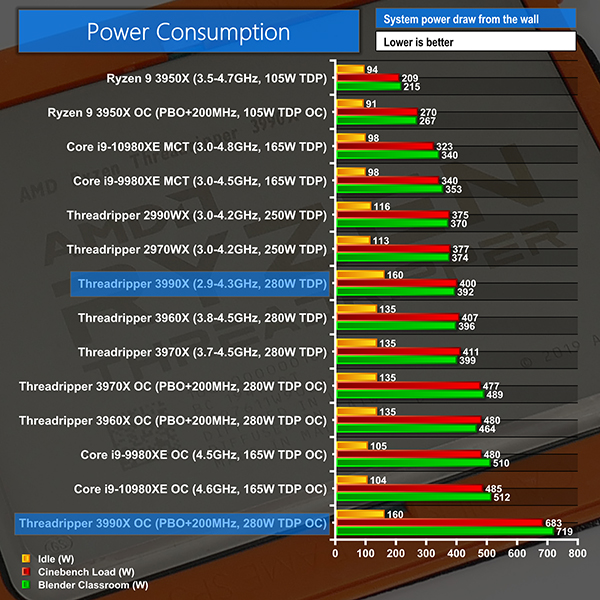 AMD’s efficiency gains with Zen 2 and TSMC 7nm process technology have been critical in allowing 64 cores to be squeezed into a 280W TDP package. As is the case with all Threadripper CPUs, that 280W TDP rating translates directly into the package power budget for the Precision Boost 2 algorithm.

Unsurprisingly, the 280W TDP 3990X demands the same amount of power as the other 280W TDP Threadripper chips – around 400W under heavy all-core load. The differences between our Threadripper 3960X or 3970X and 3990X idle readings pertain to variations between the test motherboards in each case.

It is actually quite remarkable to see AMD offering more than three times as many cores as Intel’s HEDT flagship whilst only commanding around 60W more power under stock load conditions. 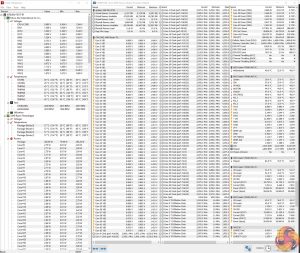 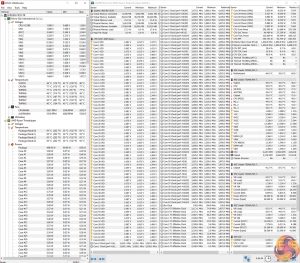 Removing the power-limiting shackles by using PBO, AMD’s Threadripper 3990X becomes extremely thirsty. Our readings highlight power draws of around 700W at the wall once the PBO frequencies settle to sensible stable points. For the first runs, where temperature induced PBO throttles have not kicked in, we recorded almost 900W of power draw from the wall.

If you were not convinced that the overclocked Threadripper 3990X will need a high wattage power supply and serious cooling, you should be now. Oh, and do not forget about the demand placed on a motherboard VRM. These numbers highlight clearly just how far outside of the Zen 2 optimum power efficiency range the 3990X has to operate to jump from around 3GHz stock all-core clocks to around 3.5 to 3.6GHz overclocked all-core frequency. 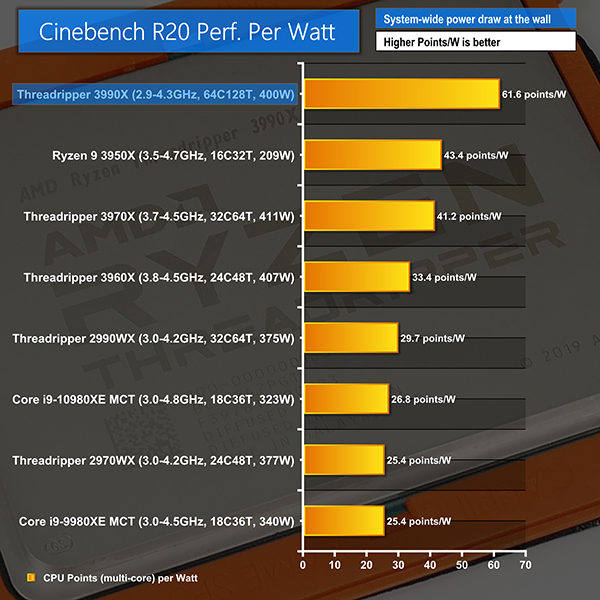 Huge multi-threaded resources and a power efficient, yet reasonable, operating frequency are ingredients for success in our Cinebench performance per Watt metric. The 64-core 3990X delivers, beating out the 32-core 3970X by around 50%.

This is important to professional buyers who either individually, or through a company, must consider electricity usage. Being able to get renders done with higher efficiency can, at scale, translate into tangible savings on project costs across a team of staff. There’s also the benefit of being able to use the same 280W TDP rated CPU cooler and motherboard that the 3970X runs on. 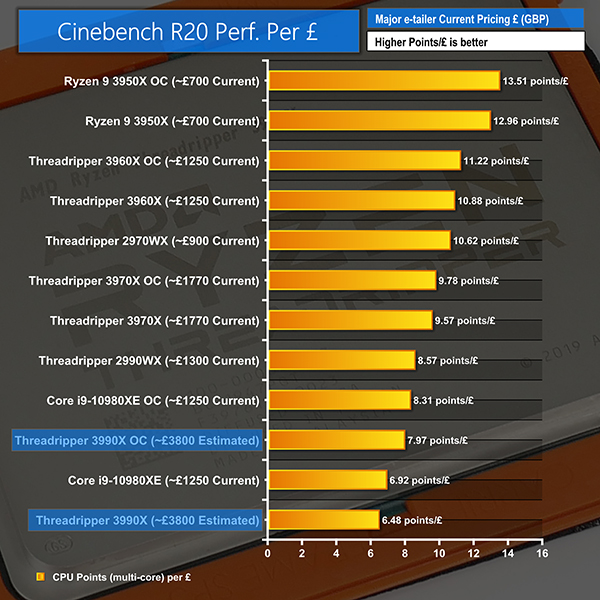 The price premium commanded by a flagship product rarely paints a positive picture in our performance per pound chart. That trend continues for the 3990X, which comes in 100% more expensive than the 3970X but does not deliver 100% more performance.

This really is a case of buyers being able to justify the additional expenditure, even if is not particularly cost efficient, by being able to complete more high value project work in a given period of time. Paying an extra £2000 for a processor that offers performance levels that allow you to take on £3000 of extra work can make business sense in many people’s models.

Temperature recordings were taken using a Cooler Master Wraith Ripper TR4-specific air cooler. Ambient temperatures were around 23-24°C. Competing CPUs without the asterisk in the chart were tested with a Corsair H100X 240mm AIO and are therefore not directly comparable. 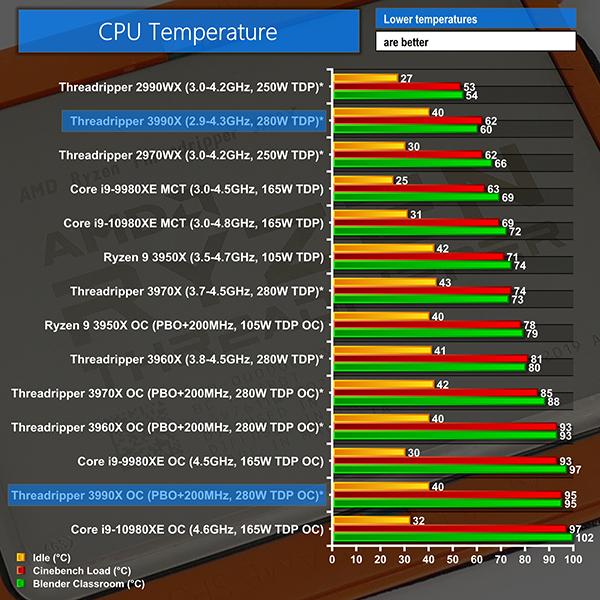 Using the Cooler Master Wraith Ripper, recorded temperatures were very low at just over 60°C. This is because the temperature profile of AMD’s Zen 2 processors is frequency-biased and the lower frequency of the 3990X allows it to operate at a lower core voltage and therefore lower temperatures. That’s a lot of ‘lowers’.

You will note spikes above 75°C during usage as the frequency is ramped up by Precision Boost 2 when fewer cores are loaded or there is power budget available. But our sustained, all-core testing highlights that the Threadripper 3990X is just as easy to cool as the 24- and 32-core siblings. Understandable, given its 280W TDP. 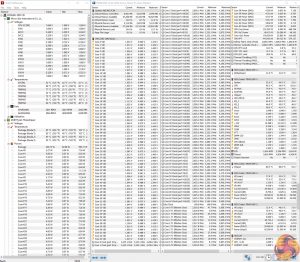 Of course, that logic completely changes when the power shackles are smashed with Precision Boost Overdrive overclocking applied.

Software-reported CPU package power was in the order of 500W for these readings. However, extended stress tests running towards the 1-hour mark saw the delivered package power drop to around 400-450W in order to stick to the 95°C target.