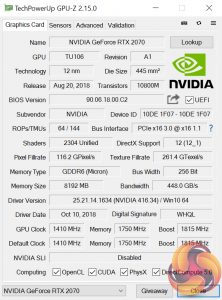 As mentioned, the Palit ships with an 1815MHz boost clock out of the box – no software needed.