Since Bitcoin arrived in 2009, numerous alternatives have emerged, either based on derivatives of the same core code or developments of the blockchain idea. Bitcoin is the granddaddy of cryptocurrencies of course. Looking at market capitalisation – which is the total value of all the currency in circulation – Bitcoin is way ahead, at over $156 billion at the time of writing.

The clearest contender to Bitcoin’s crown is Ethereum, with just under $96 billion. Ripple XRP is a distant third, at $37 billion. Then there’s Bitcoin Cash, at $21 billion, Cardano at $11 billion, Stellar, NEO and Litecoin at $8 billion, EOS at $7 billion, and NEM in tenth place with under $6 billion. You can see a long list of cryptocurrencies and their market cap here.

Other cryptocurrencies worth talking about for significance and amusement value from the enormous list are Monero and Dogecoin. But at the time of writing there were 892 coins and 582 tokens being tracked on the CoinMarketCap website, with a total combined value of $440 billion. So there really is a deluge of alternatives to Bitcoin, or “alt coins”, and anyone with sufficient coding skills can potentially fork a cryptocurrency’s code to make their own, with the most significant recent example being Bitcoin Cash, which was forked from Bitcoin on 1st August 2017. 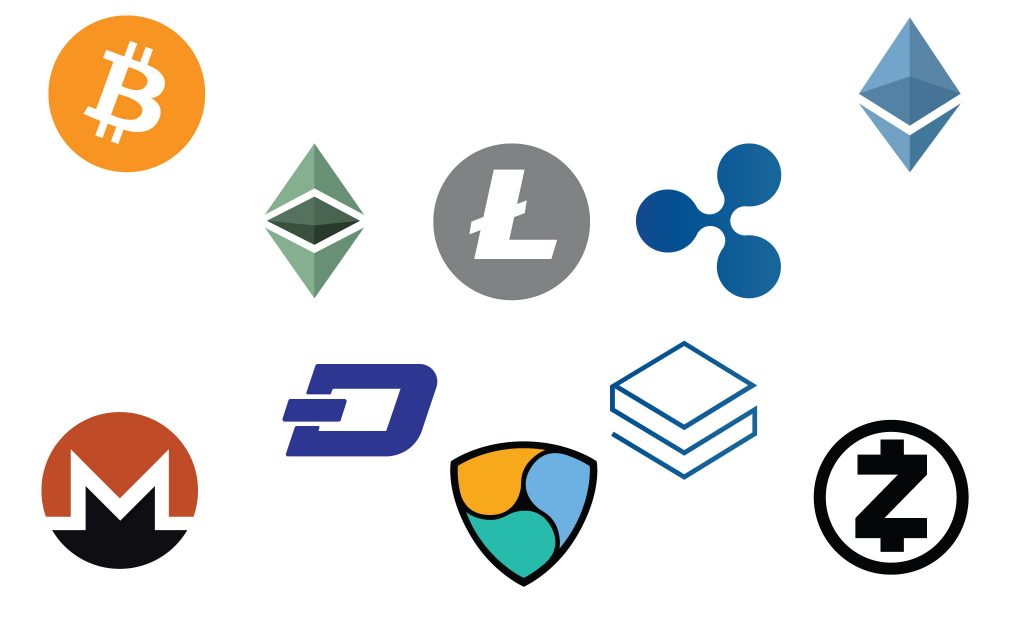 As we just mentioned, some cryptocurrencies are called coins, and some are called tokens. The distinction is whether a cryptocurrency is directly connected to its own blockchain or other transaction ledger system. If it does have this structure, it’s a coin. If the cryptocurrency sits on top of another platform, without having its own blockchain, it’s a token. The vast majority of tokens sit on the Ethereum platform, with just a smattering using Omni, NEO and other platforms.

There are numerous subtle differences between Bitcoin and its pretenders, including smart contract support, but some of the main ones are how mining is reimbursed and the size of a block in the blockchain. The latter has an impact on global transaction speed, which is becoming one of the main issues with the viability of Bitcoin compared to its competitors. Monetary supply – the amount of coins available and how rapidly they are released – is also a key differentiating factor.

More than 80 per cent of all 21 million available Bitcoins have already been mined, and the rewards halve every 210,000 blocks. At the time of writing, the reward for mining a Bitcoin block was 12.5 bitcoins, but this will halve to 6.25 around 3rd June 2020. There’s a handy tracking countdown at http://www.bitcoinblockhalf.com/.

It takes around ten minutes to generate a block, which has a maximum size of 1MB. As a result, Bitcoin can only process between 3.3 and 7 transactions per second, which is going to be an increasing scalability issue if more people use the currency for everyday financial transactions. This is part of the reason why Bitcoin transactions have become significantly more expensive and unreliable in the last couple of years.

Ethereum is called a second generation cryptocurrency, as it is built to avoid some of the problems found with Bitcoin. Mining an Ethereum block used to earn five ether, paid in return for a similar hashing process as Bitcoin. There was also a system whereby 2-3 ether were awarded to other miners who found the solution but didn’t get added to the blockchain, called an uncle/aunt reward. However, after the Byzantium hard code fork in October 2017, the earnings dropped to three ether for mining and 0.625-2.625 ether for uncle/aunt rewards. However, this “proof of work” system may be replaced by a “proof of stake” system that doesn’t involve mining in the future.

Etherium doesn’t have a fixed maximum block size in the same way as Bitcoin. Instead, transactions are given a cost in “gas” based on storage needs, complexity and bandwidth usage, and miners vote on a “gas limit”. So the size of an Ethereum block varies, albeit with a general upwards trend, sitting around 25KB at the time of writing.

You can see how the Ethereum block size has changed over time at Etherscan. There’s also a handy live stats page for Ethereum performance, although it’s not a complete picture of all Ethereum traffic. Processing a block takes about 15 seconds, and this means that around 15 transactions are completed per second. This is better than Bitcoin, making Ethereum a bit more scalable, but only about twice as much.

There is increasing interest in Ripple XRP, although its market cap is currently way behind the top two cryptocurrencies. Ripple is the organisation, and XRP the actual currency. It’s very different to most other cryptocurrencies in structure. Whilst Bitcoin is a public entity, Ripple is a private company. XRP boasts much shorter transaction times than Bitcoin, at around three seconds compared to at least an hour or much more, depending on fees, for Bitcoin.

Transaction costs are also much lower. Where a Bitcoin transaction can cost as much as $80, a Ripple XRP one is $0.004, and there can be 1,500 of them per second, making it much more viable for global usage. There is a supply limit of 100 billion XRP, although 55 billion are held in an escrow smart contract, which releases them at the rate of 1 billion a month, with unused XRP returned to the escrow at the end of the month for later release. Ripple estimates that it will take about 15 years for 90 per cent of XRP to be released.

Ripple also uses a consensus proof-of-stake system rather than distributed proof-of-work of Bitcoin and Ethereum. So you can’t actually mine it. The clients involved in the consensus algorithm are limited and strictly validated, not any end user with computing power to provide. Ripple claims to use blockchain technology, but it’s not decentralised on a peer network like other cryptocurrencies. This has made it much more attractive to banks and governments, because they can retain control.

As we mentioned earlier, Bitcoin Cash is a hard fork of Bitcoin, so is structurally very similar. However, the block size has been increased to 8MB, with an adjustable level of difficulty to improve verification speed, although this has caused security concerns. This could drop transaction times from Bitcoin’s ten minutes to two minutes 30 seconds. Right now, Bitcoin Cash can handle around 62 transactions per second, but performance could rise to over 240 per second with reduced difficulty. This will make the cryptocurrency more scalable than Bitcoin or Ethereum, although not so much as Ripple XRP.

There are so many alt coins we could never hope to provide a comprehensive comparison of all of them. But just looking at a selection from the top ten and beyond gives a flavour of the kinds of features that differentiate them.

Cardano claims to be based on academically peer-reviewed code, implying that it’s more rigorously constructed. Its main claim is how it separates smart contracts (about which more later) from its payment system, which uses its ADA currency. It uses a proof-of-stake system like Ripple XRP rather than the proof-of-work used by Bitcoin and Ethereum. As a result, you can’t mine it, with a complex system of slots and token-holding nodes doing the confirmation, although at the moment all these nodes are owned by Cardano itself. However, whilst Cardano currently has a similar transaction speed to Bitcoin, developers claim it will offer billions of transactions per second with a future update.

Stellar is based on Bitcoin’s blockchain technology, but with the ability to complete transactions in 2-5 seconds. A performance of at least one thousand transactions per second is claimed, and as a result IBM has partnered with the company, along with 14 banks around the world.

NEO is another cryptocurrency like Ethereum and Cardano that focuses on the concept of smart contracts. But it adds a public key-based digital identity system, which has to be added by a third party for Ethereum. Like Cardano, it uses a proof-of-stake system to confirm blocks, and its developers claim it can handle 10,000 transactions per second.

Litecoin has a faster transaction time than Bitcoin of 2.5 minutes and can handle 56 transactions per second. However, one of its chief differences is that it uses the Scrypt cryptographic algorithm rather than Bitcoin’s SH-256. Mining SH-256 is now much more efficient using optimised Application-Specific Integrated Circuits (ASICs), with which consumer-grade CPUs and GPUs are increasingly unable to compete. Scrypt is supposedly more accessible to everyday hardware, although ASICs are appearing that are optimised for it too.

NEM doesn’t have smart contracts built in, although lots of developers are building them on top thanks to an architecture that facilitates integration into existing networks. NEM claims to be capable of 4,000 transactions per second.

Monero in its current form can handle up to 1,700 transactions per second. It achieves this with variable block sizes, allowing very large blocks, although memory and bandwidth puts a limit on this in practice. However, Monero’s main point of interest, and the reason why we mention it ahead of coins with larger market capitalisation, is that it aims to keep the sender, receiver and amount of every transaction secret. For this reason, Monero is popular with those wishing to evade the law such as ransomware makers. It also aims to make its mining more egalitarian. Thanks to this feature, its mining code JavaScript implementation has found its way illicitly into websites and apps, leeching processing power without the owners’ consent.

Dogecoin seems to have been created as a bit of a joke, with a logo based around the Shiba Inu canine of the infamous Doge meme. It has gained favour as a social media tipping system on Reddit, Twitter and Twitch.tv. There is no limit to how many dogecoins will become available from mining. Over five billion are being produced a year, and 98 billion are already in circulation, with a 10,000-coin reward for each block mined.

These are just a few notable coins from the burgeoning array of cryptocurrency possibilities. One of the key skills in cryptocurrency mining is choosing the most profitable coin to mine at any given moment in time. Some mining pools such as NiceHash do this for you automatically, which is why it’s such a great place for beginners to start. But experts could do better by monitoring trends themselves and switching algorithms accordingly. Investors will also have their own strategic reasons for backing one cryptocurrency over another as the most likely to appreciate. Nevertheless, predicting which coin will come out on top is a black art – literally a minefield.