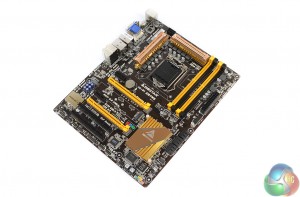 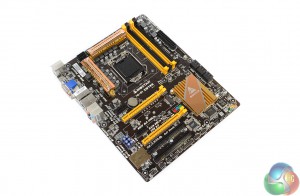 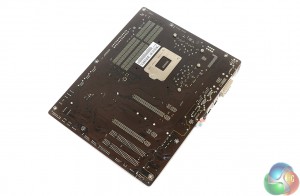 Biostar outfits its Z97WE with a yellow, gold, and black colour scheme. Clearly the vibrant shades will not appeal to all, nor will they be easily matched with other components. And then there’s the brown PCB which will look horrible under bright lights.

With that said, there are many people who could not care less about how a motherboard looks and will instead welcome the resources being put into hardware rather than aesthetics. 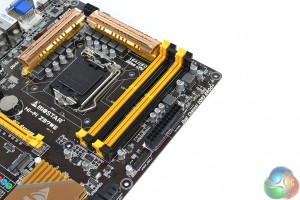 Four double-latched DIMM slots provide capacity for up to 32GB of DDR3 memory. Biostar claims support for frequencies of up to 2800MHz, although we wouldn’t be surprised if higher speeds are possible with the correct CPU and memory combination.

An outwards-facing USB 3.0 header is situated adjacent to the 24-pin power connector and receives its connections directly from the Z97 chipset. 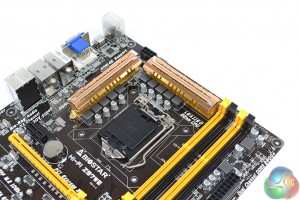 With that said, spacing between the DIMM slots and CPU socket is noticeably smaller than on many other motherboards, hence CPU cooler interference was an issue for our be quiet! Dark Rock Pro 3 and G.Skill TridentX memory.

Three 4-pin fan headers, two of which are controlled by the CPU PWM channel, are found along the board’s upper edge. Also situated in a smart position, tucked away between the heatsinks, is the motherboard’s 8-pin CPU power connector. 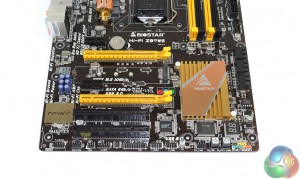 Two full-length PCIe 3.0 expansion slots provide two-card CrossFire capability with x8/x8 bandwidth. Biostar chooses not to purchase the SLI license in an attempt to cut costs. As such, two Nvidia GeForce graphics cards cannot be teamed together in an SLI configuration.

Slot spacing is smart; two dual-slot graphics cards are given a cooling gap between them, or a pair of three-slot boards can be installed. Also smart is the M.2 connector’s positioning which allows an SSD’s ugly PCB to be hidden. Biostar gives users extra compatibility by providing support for 110mm-long M.2 devices.

The standard affair of USB 2.0, audio, and fan headers is found along the motherboard’s bottom edge. Thoughtful additions for a budget motherboard are the power and reset buttons and diagnostic LED which make on-the-table troubleshooting a much simpler task. When the system is powered, CPU temperature is displayed on the two-digit LED panel.

All six of the right-angled SATA 6Gbps ports operate directly from the Z97 chipset. Biostar keeps costs under control by choosing to bypass add-on storage controllers.

A socketed Winbond chip is in charge of UEFI BIOS duties. 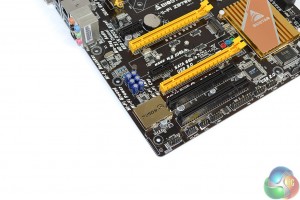 Audio protection is taken care of by an EMI shielding cover and a discrete PCB pathway that is illuminated with blue LEDs.

Many may be quick to question the use of Realtek’s previous-generation ALC892 audio codec, rather than the latest ALC1150. With its signal-to-noise ratio (SNR) of 110 dB (according to Biostar), the ALC892 looks to be a solid alternative to the 115 dB ALC1150, on paper at least.

Three video connections, including the HDMI port that supports 4K resolutions, are found on the rear IO panel. The four USB 3.0 and two USB 2.0 ports operate from the Z97 chipset. PS/2 support is provided for gamers with keyboard supporting the connection.

The pair of GbE LAN ports are provided by Realtek’s RTL8111G chipset and support Teaming for increased network bandwidth. 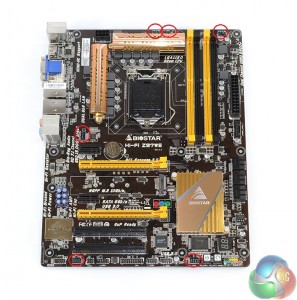 Biostar’s fan header distribution is smart. Of the six 4-pin fan headers, four are found within reaching distance of the CPU socket, while the remaining two are situated along the board’s bottom edge. This layout ensures good coverage to users with front and side panel case fans.

Five of the fan headers are operated by the ITE IT8728F chipset while the remaining one is powered by a Fintek F75308 controller.