We are kicking off our tests with Batman: Arkham City, an open-world action brawler. We can’t see the exact graphical settings for this particular title but we do know that everything is preset by the GeForce Experience. We also noted that while you can switch to streaming at 1080p, almost every other title defaults to 720p so we would assume that Batman got the same treatment. 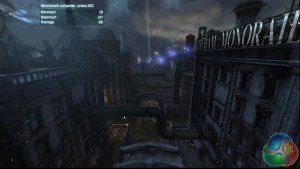 Nvidia is using an Intel Xeon E5-2670 CPU, 16GB of RAM and an Nvidia GRID K520 graphics card to power these games. The hardware is clearly up to task as Arkham City’s in-built benchmark recorded an average of around 85 frames per second.

We ran the benchmark multiple times to ensure that video recording did not have an impact on performance. Our experience remained the same with recording turned off.

While the hardware on Nvidia’s end can clearly power games at smooth frame rates, the streaming performance isn’t great. The video above does show some stuttering and audio breakage.

Things seem to improve a bit once we hit the actual game. During the opening fight sequence, the experience was fairly consistent, with minimal bumps in the road.

The opening fight sequence seemed promising but unfortunately, things took a turn for the worse once we hit the open world and gained access to the full Arkham City map.

As you can see in the video, lag spikes hit quite frequently once the map opens up. This can make fights rather difficult, we also experienced some slight input lag at times- it is clear that our stream quality was taking a hit.

Is cloud gaming viable for open world action brawlers with current technology? We are going to have to pass on that one. I would struggle to play through the entire game with the performance we demonstrated here.