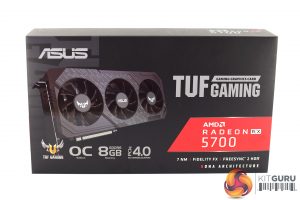 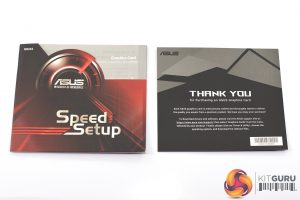 The ASUS RX 5700 TUF Gaming X3 ships in a black box, with a medium-sized image of the card visible on the front, alongside the TUF and AMD Radeon branding.

Inside, the accessory bundle is limited – with just a quick start guide and thank you note included. 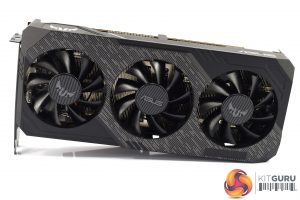 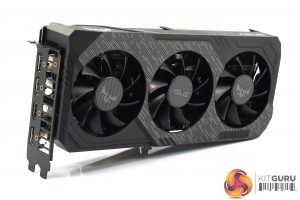 The card is what we are all here for though, and I do think it is an attractive design. The shroud is made from matt black plastic, but the section around the fans also features some grey lines/accents which look visually appealing. It's very colour neutral, so if you have a colour coordinated build, this won't cause you any problems.

Like I said, it is made from plastic – I do think an aluminium shroud would have suited the TUF brand perfectly, but inevitably that would also have lead to higher cost. As it is, the plastic shroud is surprisingly firm and hardly flexes at all – perhaps the overall square design helps with this, though once the card is installed in your case I suppose it doesn't matter too much either way.

Another thing to touch on are those three fans. They are Power Logic PLA08015S12HH models, measuring 80mm across (75mm blade to blade) so they're not the biggest fans. On top of that, the central hub is fairly large so the blades themselves aren't that long either. It will be interesting to look at thermals and acoustics later in the review. 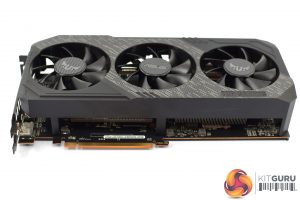 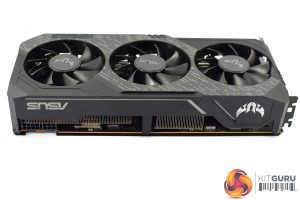 Looking at both sides of the card, we can again see how the plastic shroud keeps its square design, extending a fair way up the sides of the heatsink.

It's also worth touching on dimensions, with the card measuring 269 x 125 x 54mm. So at just under 27cm it's not the longest card I've reviewed this year, but it's still a 2.7slot card so you will want three free expansion slots in your case. 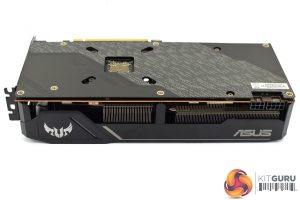 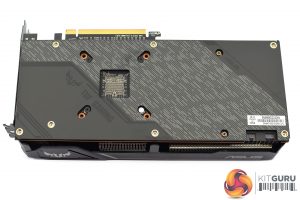 On the front side of the card, we can get a look at the TUF logo on the left-hand side, and the ASUS logo over in the right corner. There's also a very small LED strip next to the TUF logo which lights up once the system is powered on.

As for the backplate, it's a full-length metal design, with just a small cut-out behind the GPU core. It's black with more grey accenting which personally I find quite stylish, but feel free to disagree with me. 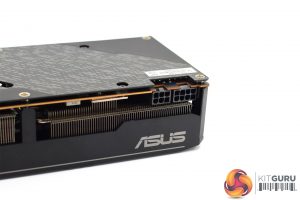 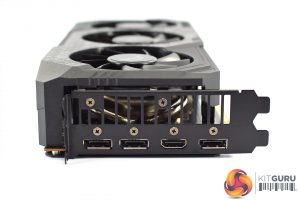 For power requirements, the card has 1x 6-pin and 1x 8-pin connectors, while video outputs are provided by 3x DisplayPort and 1x HDMI connectors. 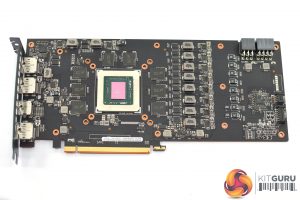 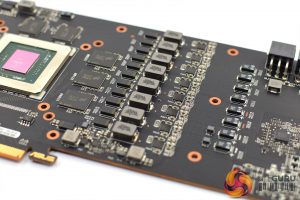 If we remove the cooler to get a look at the PCB, we can see ASUS has made a few changes here, with the GPU VRM being increased from a 6-phase design on the reference card, to an 8-phase design here. Memory power delivery is still handled by 2 phases. 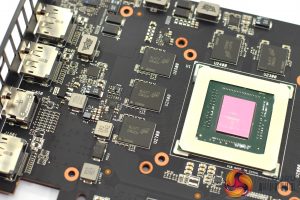 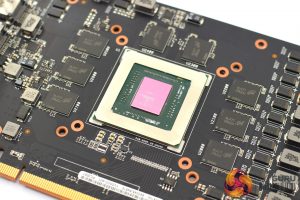 Additionally, we can get a look at the 8x1GB GDDR6 memory modules from Micron, each chip is labelled ‘9LA77D9WCW'. The Navi 10 GPU is also visible, with its small 251mm² die size. 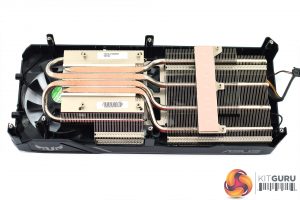 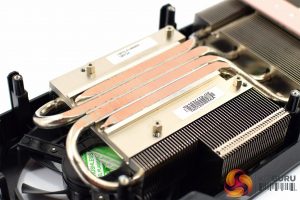 Additionally, while there is a separate coldplate and thermal pad for the MOSFETs, I found it very surprising that there is no cooling for the VRAM chips at all – instead, the memory has to rely on airflow from the three fans instead of thermal pads and contact with a coldplate. This is certainly a strange move from ASUS – these Micron chips are rated at up to 95C so this is certainly something to look at later on.