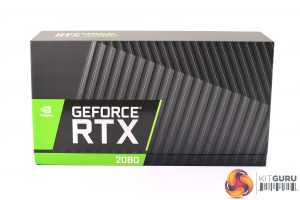 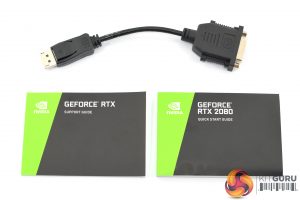 The Nvidia RTX 2080 Founders Edition card ships in a compact, rectangular box. RTX branding is prominent on the front of the box, while there is also the classic Nvidia green accenting.

Inside, the included accessories consist of: 1x support guide, 1x quick start guide, and 1x DisplayPort to DVI adapter. The display adapter is something we first saw included with the GTX 1080 Ti as Nvidia removed the DVI connector from that card. 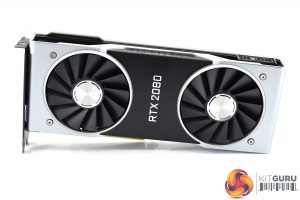 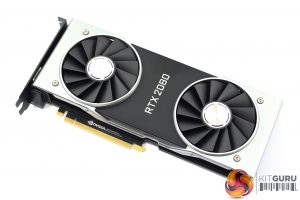 That just leaves the card itself in the box. Both RTX 2080 and RTX 2080 Ti share the same cooler design, and I have to say I think it is a big improvement over previous reference cards, including the GTX 1080/1080 Ti Founders Edition cards.

Most obviously, it has ditched the single radial fan (blower-style fan) in favour of dual axial 13-blade fans. These measure 90mm and sit either side of a black aluminium section that is home to the RTX branding. The silver sections are also made of aluminium, and the card definitely feels very premium in the hand – it weighs in at just under 1.3KG.

In terms of dimensions, it is relatively compact by today’s standards – it measures 266.74mm long and 115.7mm high. It’s also 2-slots thick. 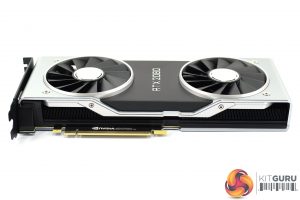 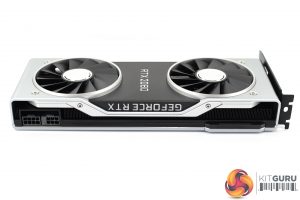 Cooling the card is actually a full-length vapour chamber, while there is also an aluminium fin array you can see from either side of the card. Air from the two fans is exhausted out these sides, and from the back of the card. This does mean more hot air will be left in your case as a result – compared to a previous generation blower-style cooler, that is – so bear that in mind. 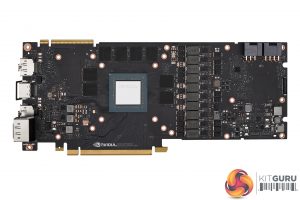 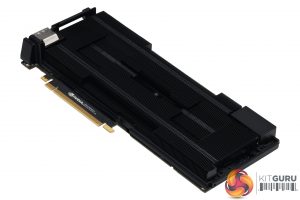 New to the RTX 20 series is its iMON DrMOS power supply. With the RTX 2080, this is an 8-phase solution. A key feature of this iMON power supply design is its dynamic power management system which can handle current monitoring and control at the sub-millisecond level. This means it has very tight control of over the power flow to the GPU – thus allowing for improved power headroom which should help with overclocking.

The other key feature of the iMON supply is its ability to dynamically use less power phases when not running under full load, as this enables the power supply to run at maximum efficiency when there is little load on the system – when your PC is idling, for instance.

In terms of the cooler, as we mentioned this is the first time we have seen a full-length vapour chamber on an Nvidia reference card – or on any card for that matter – so the obvious benefit is increased size, allowing for greater heat dissipation. There is also an aluminium fin stack which is used to dissipate any remaining heat. 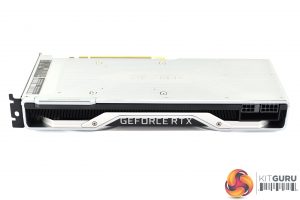 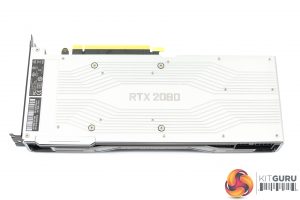 Looking on the card as it would be once installed in your case, the ‘GeForce RTX’ branding is clearly visible and this lights up green once powered on. No RGB here.

As with previous Founders Editions, the RTX 2080 does sport a backplate – but it is now silver, rather than black. I think it looks fantastic, and it should also help with heat dissipation. It is made from more aluminium, and has a subtle but interesting design with lines etched into the metal, which bend around the RTX 2080 branding in the middle of the backplate. 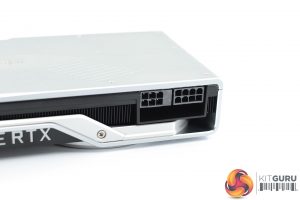 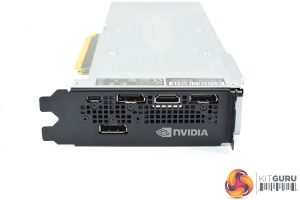 The RTX 2080 Founders Edition requires 1x 6-pin and 1x 8-pin power connectors. Interestingly, the 6-pin connector looks like it is just an 8-pin plug with two of its holes blocked off, which suggests Nvidia is re-using as much of the design from the RTX 2080 Ti as it can.

Lastly, display outputs are provided thanks to 3x DisplayPort 1.4a, 1x HDMI 2.0b and even 1x VirtualLink (USB-C) connector. This inclusion is aimed for next-gen virtual reality HMDs, which should only require a single cable to connect your PC – though you could also use the connector now if your monitor has a Type-C input.