The logic behind testing the R9 Nano and its nearest price competitor – Nvidia's reference GTX 980 Ti – inside a high-end SFF build is to see how the AMD card performs in its intended environment and to see if Nvidia's competitor can maintain its performance lead with constricted cooling space.

We see this test as logical because many SFF cases (especially those targeting gamers and enthusiasts) are perfectly capable of housing cards as large as the GTX 980 Ti. 1920×1080 and 4K were the resolutions used as these are the most popular TV resolutions for gamers interested in using the graphics cards inside a SFF gaming HTPC to power a large screen. 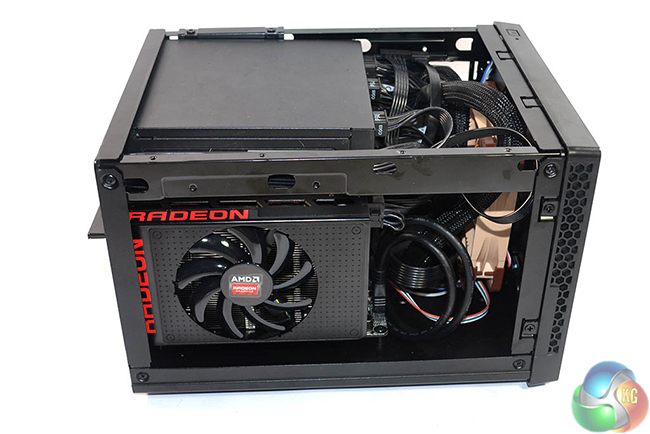 In order to alleviate bottlenecks and build a realistic high-performance gaming SFF system, we opted for a mixture of enthusiast gaming hardware. The Intel Core i7-6700K processor was stock-clocked (because that's fast enough for gaming) and sat on Asus' Z170I Pro Gaming mITX motherboard with 16GB of Crucial DDR4-2400MHz memory.

Storage consisted of a Crucial BX100 250GB SSD for the OS and some games, as well as a 256GB Plextor M6e for additional games. Seasonic's excellent 760W Platinum unit was used for power.

Star of the show was Silverstone's SUGO SG13 mITX chassis. This is a superb case with smart design features from front to back. Most importantly, it is one of the smallest mITX cases on the market but is actually able to fit graphics cards as large as the reference GTX 980 Ti or Titan X. 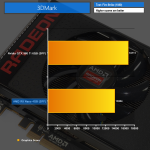 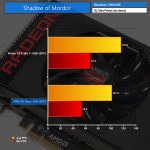 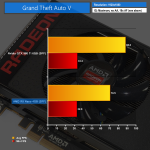 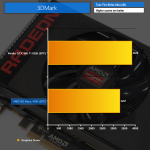 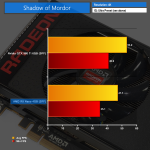 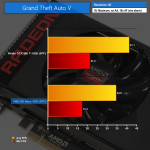 Perhaps less obviously, the R9 Nano is also outpaced by the reference GTX 980 Ti at 4K. The higher thermal stress of 4K game rendering simply forces both cards to increase the fan speeds in order to provide adequate cooling.

We initially thought that Nvidia's blower-style cooler may force the GTX 980 Ti to start throttling with the demanding thermal load. But in reality this wasn't an issue – the fan speed was instead increased to keep the GPU core temperature in check. Pretty much the same logic applies to AMD's R9 Nano. 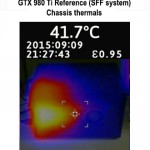 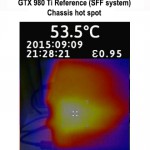 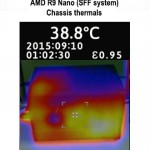 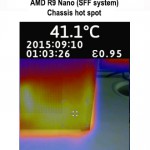 This is where we start to see usability differences between the two similarly-priced solutions. Nvidia's 250W TDP GTX 980 Ti is dealing with a significantly greater heat output, and this causes high temperatures towards the rear of the chassis. What I will say, however, is that the blower cooler design is very effective in venting the vast majority of the hot air outside of the chassis.

AMD's R9 Nano, on the other hand, runs with significantly lower surrounding temperatures thanks to its 175W typical board power rating. The caveat is that a large proportion of the hot air is expelled directly into the chassis due to AMD's cooler and shroud design.

I highlighted earlier in this review that the open front side of the card would be an escape for hot air to work its way into the chassis environment. Thermal imaging proves this point because the hottest part of the case's side panel was towards the front section.

With a large portion of the heated coolant air being exhausted inside the chassis, a system based on the R9 Nano is likely to experience higher CPU and motherboard temperatures than a system with a blower-style GPU cooler like that used on the reference GTX 980 Ti. 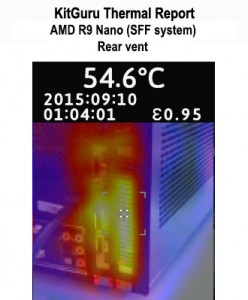 There is indeed a good amount of heat going through the rear vents, although the previous thermal imaging shots prove that the heat is travelling in both directions – out of the case and back into it. 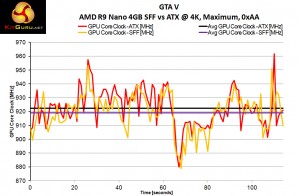 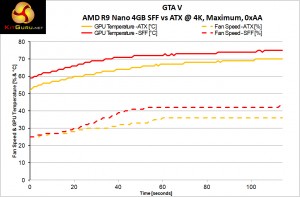 Looking at clock speeds throughout testing in the SFF chassis, there was little difference between those displayed inside the well-cooled ATX case. Silverstone's smart design (and many other mITX cases are similar) gives a direct breathing point for the graphics card fan. This allows the temperature levels to be kept in check and the GPU core clocks to operate without throttling.

We did, however, notice that both the GTX 980 Ti and the R9 Nano were operating with higher fan speeds in the SFF system (compared to the ATX system) while under heavy load.