We received our sample card without retail packaging or an accessory bundle. The items that are bundled will depend upon the board partner's choices, although we would expect something along the lines of a HDMI-to-DVI plug, power cable adapters, and generic documentation. 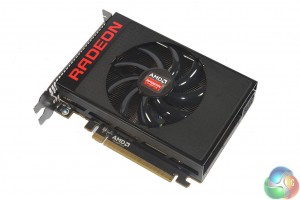 At first look it is clear that AMD's Radeon R9 Nano is a tiny card in many senses. The aesthetic design is likely to appeal to gamers, with a largely black metal shroud contrasted by bold red written text. AMD uses a dark black fan which has a reflective finish.

The Fury X shroud CAD models were given to consumers who wanted to 3D print their own cover, and representatives on AMD's recent press call suggested that a similar thing could be done with the R9 Nano. 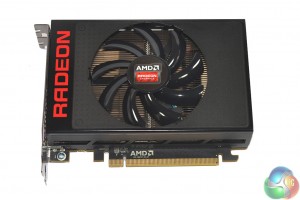 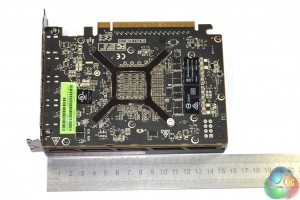 A single (roughly-92mm) axial fan is used to cool the Radeon R9 Nano. The entire black, brushed aluminium shroud is sturdy and acts as a thermal control mechanism. The black colouring helps to manage the transfer of heat via radiation, and the aluminium material acts as additional surface area to be used for convective cooling.

The target temperature set for the R9 Nano by AMD is 75°C, but the card will throttle and heavily ramp up fan speeds when (if) 85°C is reached. Our testing showed the board running happily at 75°C, and when a higher thermal load is applied (overclocking) the fan simply runs faster to compensate. Core clock speed dynamics seem heavily weighted towards power usage of the card, rather than GPU temperature, for the default settings.

AMD's reference design does not utilise a backplate, and it seems that board partners are suggesting that this is not only related to early press samples of the card. I would have liked to see a backplate on the card, not for rigidity or aesthetics, but to spread the thermal load across a large cooling plate.

There would also be the benefit of a backplate acting as protection for any straggling cables inside a SFF build touching the rear PCB and suffering thermal issues (melting). 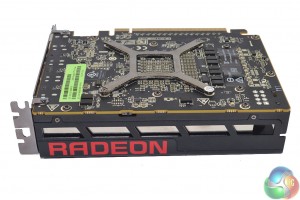 Vents on the side of the card run parallel to the heatsink's fin array. AMD representatives were keen to indicate that the fin array has been designed run in the card's front-to-back direction, rather than side-to-side.

The goal here is to ensure that more hot air is expelled out of the case – the side-to-side fin orientation typically spills heated air onto the motherboard PCB and nearby chassis side panel. 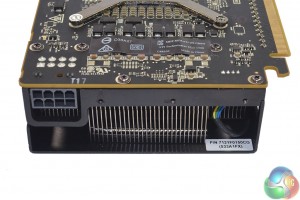 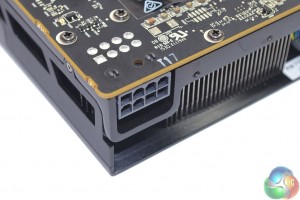 This is where that front-to-back fin array orientation starts to show a minor sign of potential weakness. AMD chose to leave the front end of the card completely open, rather than enclose it with a shroud or extension of the metal plate. With that said, there was little choice because enclosing the front end would likely stagnate the flow of air and create bigger cooling headaches.

The open design gives hot air that has been processed through the fin array freedom to escape inside the chassis with very little resistance (as my simple hand testing and our thermal imaging proved later in the review). While there is the argument that the overall pressure gradient makes it slightly more favourable for air to travel out the rear of the chassis rather than inside it (due to temperature differences between the enclosed volume of chassis air and the outside environment), a design tweak could have made certain that less hot air spills directly into the case.

AMD would likely have conducted internal testing that made this design most favourable for the design goals, however it will have the consequence of increasing internal chassis temperatures as opposed to blower-style coolers which dump the majority of their hot air straight out the back of the case.

With the R9 Nano's 175W typical board power rating, a single 8-pin power connector is allocated. The single 8-pin connector is a favourable approach (over dual 6-pins) for cards intended to be used inside SFF systems. It is far easier to route one cable in a tight space than two, even if the 8-pin PCIe connector is slightly less common.

The frontwards-facing (rather than side-mounted) orientation of the 8-pin power connector dictates an additional few centimeters of clearance to ensure that the power plug can be inserted. This may be part of the reason for AMD opting for a six-inch card, rather than use the full 6.7″ length that a mini-ITX motherboard is designed upon. 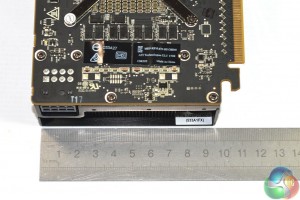 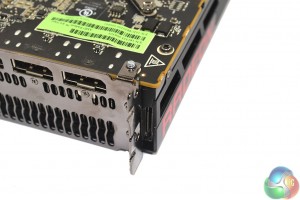 AMD's R9 Nano is a smidgen wider than the PCIe slot, so width-related interference issues are unlikely to be of any concern. 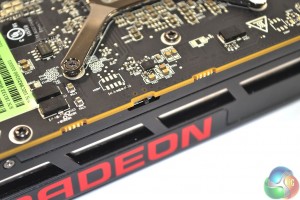 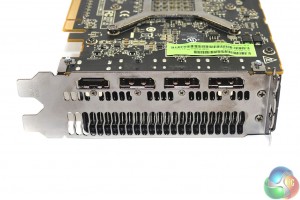 Three full-sized DisplayPort 1.2 connections and a single HDMI output form the connectivity options. Unfortunately the HDMI port does not conform to the HDMI 2.0 standard, so users hoping to get 4K 60Hz gameplay on a large TV will have to go searching for a DisplayPort-to-HDMI 2.0 adapter.

No HDMI 2.0 is unquestionably a problem to users wanting the R9 Nano for use inside a powerful gaming HTPC. AMD did, however, point out that the necessary DisplayPort adapters will be hitting the market, but the time scale is still unknown.

All four display connectors are squeezed onto a single row, with very little of the precious airflow grille space being wasted. 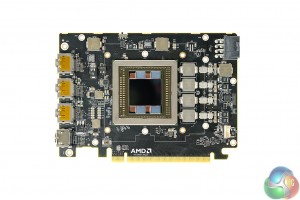 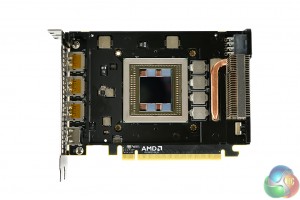 A look at the naked board shows how AMD utilises PCB space. Forming the 4GB VRAM capacity, four stacks of 500MHz HBM chips can be seen merging the interposer and the Fiji GPU. The application of on-package HBM chips is critical in reducing PCB sizing requirements and also power consumption compared to GDDR5. They also give the R9 Nano a 4096-bit bus which creates 512GBps of memory bandwidth when combined with the 500MHz clock.

Four primary power delivery phases feed the GPU solution and these are managed by an International Rectifiers controller. The MOSFETs are cooled by their own dedicated heatpipe and fin array solution which receive near-direct airflow from the 92mm fan.

It is good to see MOSFET cooling being taken seriously on a high-powered graphics card. AMD and Nvidia's reference coolers usually take good care of the power delivery components, however many board partner solutions rely upon small passive heatsinks or even incidental airflow to cool un-covered MOSFETs. 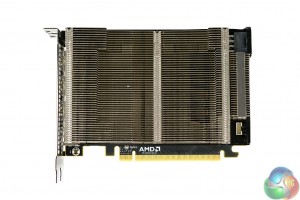 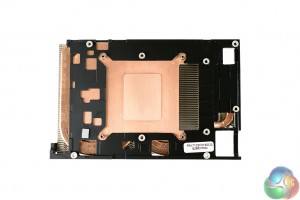 An indentation is cut into the aluminium fin array in order to make room for the relatively thick 92mm fan. As we have already discussed, the fin orientation is from the front to the rear of the card. This helps to reduce the amount of hot air that spills inside a chassis, although it does mean that a significant proportion will be blown directly out of the front of the card, as well as through the rear vent.

AMD uses a vapour chamber cooling system in order to manage the GPU's roughly 175W thermal load. A large copper plate makes direct contact with the GPU and, further up in the system, flattened heatpipes transfer thermal energy to outer edges of the fin array.

A vapour chamber cooling system is typically seen as an optimal solution for power-hungry but small graphics cards. The thermal capacity that the vapour chamber system provides in a relatively small volume makes it a common selection for such applications. 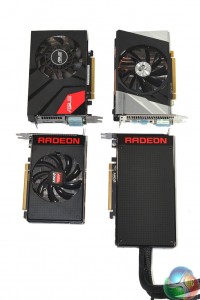 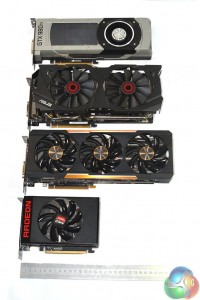 Even by the standards of SFF-intended graphics cards, the R9 Nano is still notably small. AMD's air-cooled Fiji-based card shaves about 1.5 inches off the length of a R9 Fury X, which in itself is particularly small for a high-end graphics card.

More importantly to many users with compact SFF cases, the difficulty of allocating a 120mm AIO radiator mounting location inside a mITX chassis is alleviated with the R9 Nano.

As a note, the six-inch R9 Nano is less than half the length of Sapphire's R9 390X Tri-X. Reference cooler models of Nvidia's similarly-priced GTX 980 Ti are close to 4.75-inches longer than the R9 Nano. 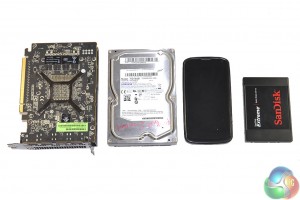 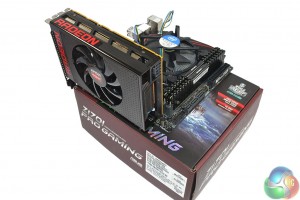 The card's six-inch length means that it does not overhang the edge of a 6.7″x6.7″ mini-ITX motherboard such as Asus' Z170i Pro Gaming. That additional seven tenths of an inch is useful for allocating clearance to the 8-pin PCIe power cable. 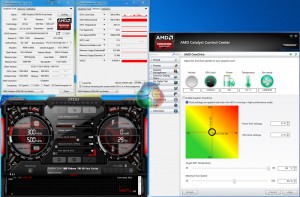 On paper (or screen), AMD's R9 Nano shows up featuring a GPU core clock speed of 1000MHz. In reality, this figure is actually up to 1000MHz, meaning that the ASIC is capable of a Gigahertz but the PowerTune algorithms will decide the instantaneous GPU clock speed based primarily on power consumption and temperature factors. 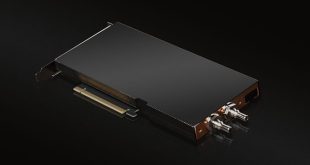