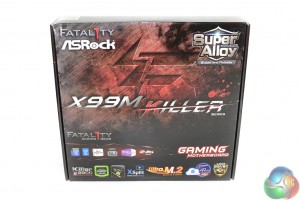 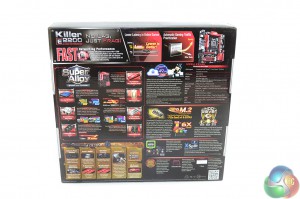 ASRock ships the X99M Killer in packaging that is typical in design for its Fatal1ty series boards. The box outlines some of the motherboard’s key features on the front side, while a more in-depth look at the specifications is found on the rear. 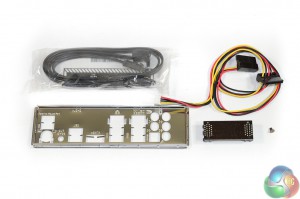 Despite the X99-relevant price tag, ASRock ships the mATX motherboard with a particularly meagre bundle. Only two SATA cables are supplied, despite the board featuring ten ports, and the rigid SLI bridge is more of a washed-out brown colour than pure black.

Throwing in an extra two SATA cables would not have dented ASRock’s bill-of-materials budget, nor would have opting for a pure black SLI bridge. They would, however, create a greater sense of satisfaction for buyers laying down almost £200 on a motherboard.

Also supplied is a screw for the M.2 slot, the rear IO shield, and the HDD Saver power cable. 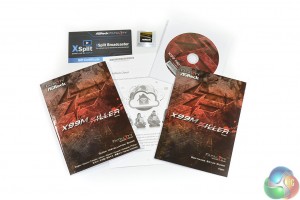 The usual affair of hardware and software installation guides, driver CD, and case sticker is supplied. ASRock also includes a guide for its cloud software, which is backed up by a 1-year Orbweb.me license worth $50.

A valuable addition to many budding gamers is the XSplit Broadcaster and Gamecaster 3-month license which is valued at $24.95.