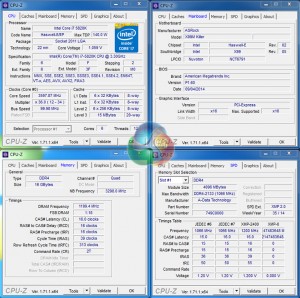 ASRock's X99M Killer does not apply multi-core enhancement (MCE) when XMP is enabled. The all-core turbo mode can be applied with ease by selecting ASRock's well-displayed option in the UEFI.

Applying MCE sees ASRock's Fatal1ty X99M Killer motherboard push the 5820K to a constant 3.6GHz. Unlike many of its competing motherboards, the ASRock UEFI also forces cache frequency to 3.3GHz when MCE is enabled.

While the general user is unlikely to have any quibbles over a free 10% boost to their system's CPU cache speed, it does skew the results of our tests in the direction of ASRock's part (albeit by a small amount). 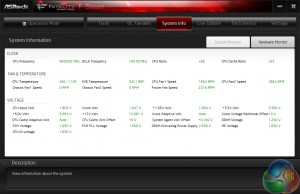 We have validated ASRock's hardware monitoring software in the past and found its readings to be close to the physical multimeter results. This is a positive, especially when the software is able to show real-time voltages, unlike CPU-Z which sometimes prefers to read from the BIOS settings.

The load CPU voltage for our MCE-clocked (stock) system was just below 1.05V. This voltage level is very forgiving on even mid-range air CPU coolers.