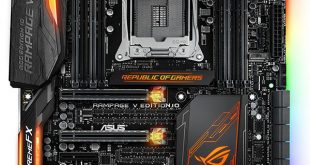 Founded in 2006, Asus is celebrating 10 years of creating gaming-orientated enthusiast hardware through its Republic of Gamers (ROG) brand. And what better way to celebrate a 10-year anniversary than with a special edition of the company’s flagship motherboard? An enhanced version of the Rampage V Extreme, the Rampage V Edition 10 has bells and whistles in abundance. 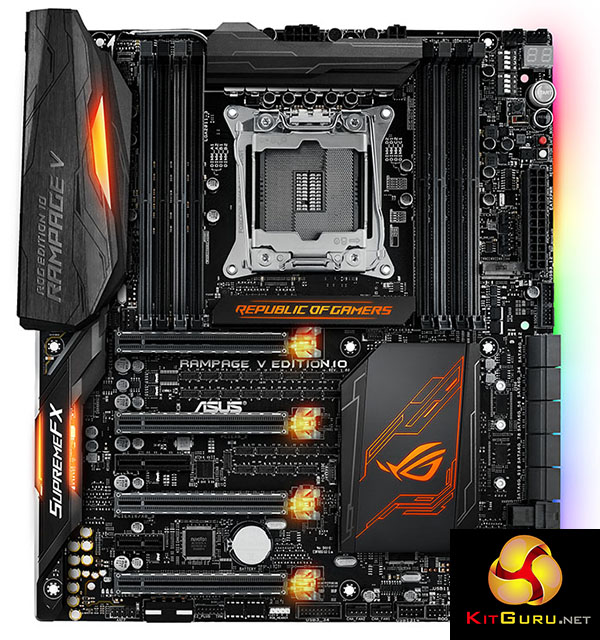 Focusing on the topic that has given Republic Of Gamers motherboards such respect over the years – their hardware – Asus clearly hasn’t cut corners when considering the features that gamers and enthusiasts desire. There’s support for 4-way SLI and Crossfire, 32Gbps U.2 and M.2 ports for high-speed NVMe PCIe SSDs, and a rear IO that includes four 10Gbps USB 3.1 ports and dual LAN connections. On top of the core hardware is a high-end audio system that is bolstered by a separate audio box featuring high-end components.

Continuing with the hardware theme, Asus gives the Rampage V Edition 10 a true eight-phase CPU power delivery system. Central to the solution are 60A International Rectifiers MOSFET solutions which are driven by a digital PWM and cooled by a sizeable heatsink which also acts as an attractive rear IO cover.

And of course with the year being 2016, RGB lighting is present. The colour scheme can be matched to one’s own preference, with different appearances in different motherboard locations being a possibility.

The feature list clearly points towards a premium product, but that is of little relevance if the performance is not up to scratch. Let’s see how this £500 motherboard performs through our test suite.