Haswell is just the latest Intel CPU architecture to see many of the critical system operations handled by the processor. As such, benchmarking a motherboard becomes more of a test to certify that the part operates correctly and meets the anticipated performance levels. 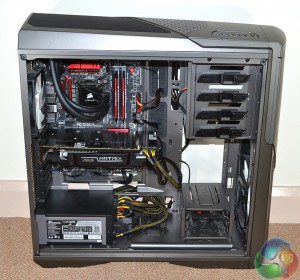 Performance of the Gigabyte Z97X-Gaming 7 motherboard will be compared to that of four other Z97 parts. All motherboards are partnered with identical hardware and software, so the results are directly comparable. 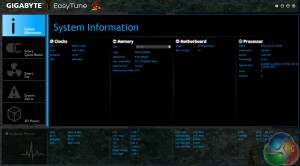 By default, the Gigabyte Z97X-Gaming 7 motherboard applies multi-core turbo (MCT) and forces the 4770K to a constant 3.9GHz when XMP is enabled. This will be displayed as the ‘stock’ setting (and outlined in the charts’ brackets after the non-turbo stock speed is displayed).

Gigabyte automatically sets the MCT VCore level at 1.20V via the UEFI (which increases to 1.212V due to loading). 1.20V seems common for a 3.9GHz 4770K and should be simple enough to tame, even for entry-level CPU coolers. 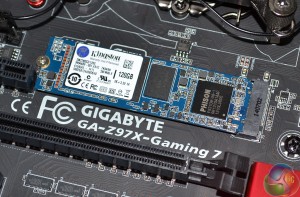 Support for the PCIe-based M.2 storage interface is one of the key features for the Z97 chipset. We use Plextor's ultra-fast M6e 256GB M.2 SSD to test the speed of a motherboard's M.2 connector. We reviewed the 512GB Plextor M6e (and its PCIe x2 adapter card) HERE.

We also use a Kingston M.2 SATA device to confirm the motherboard's operation with M.2 SATA connections.