Ryzen 7 is an eight-core chip that combines two four-core CPU Complex (CCX) ‘modules’. Each CCX features 8MB of shared L3 cache for the four cores with 512KB of L2 cache dedicated to each individual core. Two threads per core are what gives Ryzen its SMT functionality that is similar in theory to Intel’s proprietary SMT implementation known as Hyper-Threading.

Total area of a Zen 4C8T CCX is 10% lower than that of Intel’s alternative, as many news articles highlighted recently. AVX2 instructions are supported and a pair of AES units are implemented for security purposes.

SenseMI is AMD’s name for a group of sensing, adapting, and learning technologies relating to the processor’s operation. These technologies are: Pure Power, Precision Boost, Extended Frequency Range (XFR), Neural Net Prediction, and Smart Prefetch. I will encourage you to visit AMD’s webpage HERE if you are interested in more in-depth technical details of the Zen architecture.

I will try to summarise the SenseMI features concisely. Pure Power is essentially an energy saving tool that uses a large number of monitors to adapt system operation. Precision Boost adjusts processor clock speed in real time with 25MHz increments to hit an optimal point. XFR is similar to precision boost but it allows the CPU to push above its ‘maximum’ boost clock if power and cooling budgets permit. 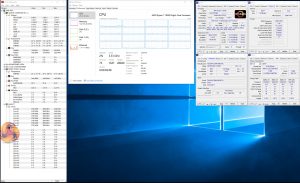 One way of validating that XFR is operating is to load up a software utility that can display the real-time frequency of each CPU core. We re-checked this by setting a single-core loading scenario (using Prime 95, WPrime, or Cinebench, for example) and observed that one of the cores operated at 4100MHz while the others sat at their default 3700MHz clock speed. 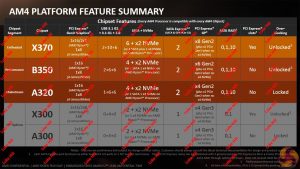 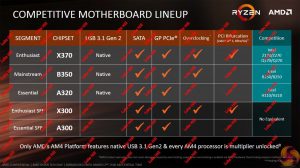 If Ryzen 7 is considered a brain, the AM4 platform can be considered the heart. AMD’s new socket is designed specifically for new Zen-based processors and the company has committed to it for a number of years, meaning that compatibility with future Zen 2 (and so on) products is promised.

The AM4 socket itself shares similarities with the AM3 socket it replaces, though mounting holes are spaced differently so many CPU coolers will need new installation brackets. A Pin Grid Array (PGA) design is still used meaning that the 1331 insertion pins for AM4 are found on the processor.

New additions to the platform include support for DDR4 memory, native PCIe Gen 3.0, and native support for modern storage interfaces and protocols (USB 3.1, SATA-Express, NVMe). The three primary launch chipsets (X370, B350, and A320) differ primarily by their support for multiple GPUs and overclocking. X370 is the enthusiast chipset that most gamers and prosumers will lean towards, though B350 is an overclocking-capable mainstream option that limits multi-GPU compatibility and storage interfaces. The upcoming SFF-based X300 and A300 chipsets will be interesting.

X370 is the only high-bandwidth CrossFire- and SLI-capable chipset. USB 3.1 and M.2 PCIe NVMe-capable connections are available on all non-SFF chipsets, though the number of storage options decreases as you go down the list. 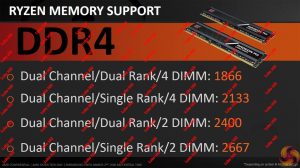 DDR4 support is new for AM4 and Ryzen. The platform supports dual-channel, two-DIMM-per-channel DDR4 memory and offers different frequency capability depending upon the module configuration used. Populating all four DIMM slots with dual-sided memory will give you official support for 1866MHz speed, while a pair of dual rank DIMMs will run at 2400MHz or higher. Using single-sided DIMMs gives you 2133MHz frequency support with 4 DIMMs installed or 2667MHz compatibility with 2 sticks. ECC memory is supported by the CPU, which may be music to some prosumers’ ears.

These are simply the supported frequencies as promised by AMD, not what you can reasonably expect through overclocking (we used two single-sided DIMMs operating at 3200MHz in dual-channel mode). One thing worth outlining, however, is that AMD’s platform does not seem to be as capable as Intel’s Z170/Z270-based platform when it comes to high-speed memory support.