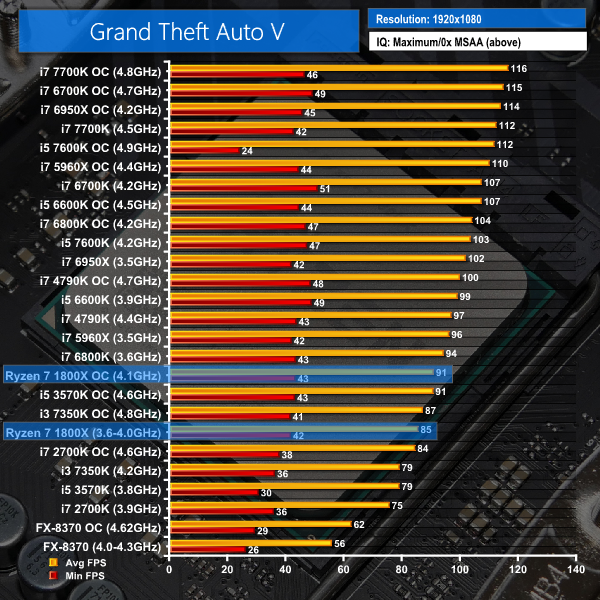 4.1GHz Ryzen 7 1800X performance is close to that of the stock-clocked 6800K and 5960X. Ryzen 7 is faster than the Sandy Bridge 2700K, even when overclocked to 4.6GHz, and it also gets close to Haswell-based 4790K performance despite the Devil’s Canyon chip running 300MHz faster.

It is, however, worth pointing out that Ryzen 7 1800X had around 70% spare CPU cycles on its SMT threads and around 40-60% spare on its 8 cores (GTA prefers actual cores to threads). So, if you want to stream GTA V over Twitch, you have plenty of spare processing horsepower to do so whereas the 6C12T 6800K is slightly more heavily loaded and a Skylake i5 will be pushing well above 90% CPU load. 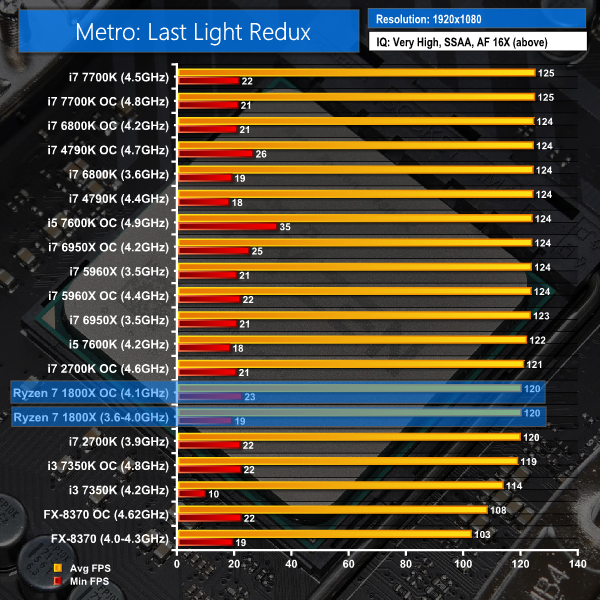 Metro: Last Light Redux is GPU-limited at around 120-or-so FPS. Ryzen 7 1800X is a little slower than the modern i5 and i7 chips, on average, though it is a significant improvement over AMD’s Piledriver-based FX-8370 (not a significant achievement). 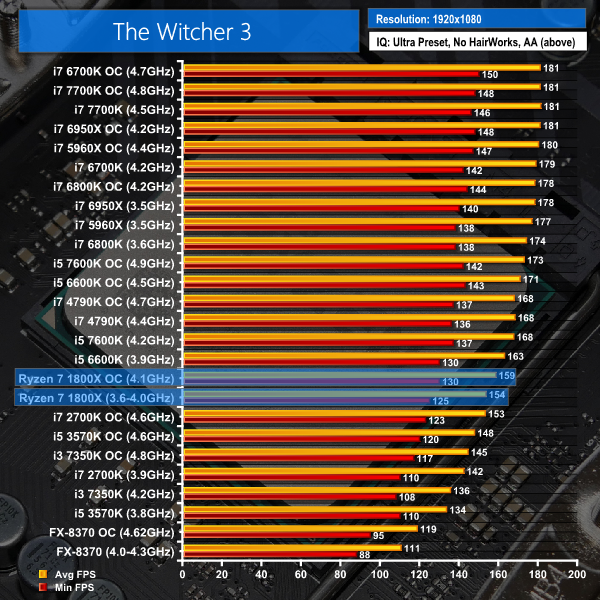 The Witcher 3 scales well with thread count and CPU frequency. Unsurprisingly, Skylake architecture is king and the extra threads of a Core i7 boost performance to a new level. Ryzen 7 1800X cannot keep pace with modern Core i7 CPUs and actually loses out to Skylake-based i5s (though those i5s are pinned to 95+% CPU load, as opposed to 30-70% on only 9 threads for the 1800X).

What Ryzen 7 1800X is able to do, though, is outperform an overclocked Sandy Bridge i7-2700K even at stock speeds. To put this into perspective, Ryzen 7 1800X beats the Sandy Bridge i7 that is commonly referred to as “fast enough for gaming”. It can’t quite hang with more modern Intel architectures but we are talking ~160 FPS average versus ~170/180 FPS.

Pair Ryzen with a GPU not as fast as Titan X Pascal and limit it to a more reasonable 120Hz and you’ll have a stellar gaming experience that’s practically indistinguishable from modern Intel chips.

The Ryzen 7 1800X CPU’s DX11 gaming performance in these three titles is fine, though it’s far from remarkable at somewhere between Sandy Bridge Core i7 2700K and Devil’s Canyon (Haswell) Core i7 4790K levels. You’ll struggle to push past 100FPS in GTA V at maximum quality settings, though Metro: Last Light and The Witcher 3 should play nicely on your 120Hz monitor, even if the Intel Haswell, Broadwell, and Skylake chips are faster.

GTA V likes Intel hardware so if it is your most played game and you run at 1080p, there are better options than Ryzen 7. Metro: Last Light plays as well on Ryzen 7 1800X as it does on modern Intel i5s and i7s. The Witcher 3 is faster on modern Intel CPUs with 4+ cores, though at more than 150 FPS average (and 120+ FPS minimums) the additional performance is of questionable use.

Ryzen 7 1800X is a solid DX11 gaming chip but it isn’t quite as fast as Haswell-E, Broadwell-E, or Skylake at the bleeding edge of performance and ultra high frame rates, based on our three tested titles. If, however, you want to do things in the background (such as stream your gameplay using OBS), Ryzen 7 operates at low overall load in DX11 games and can conduct useful work on many of its under-utilised sixteen threads.