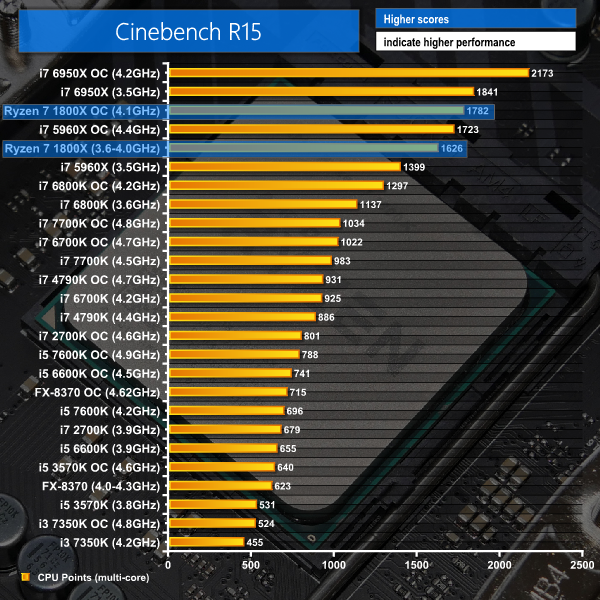 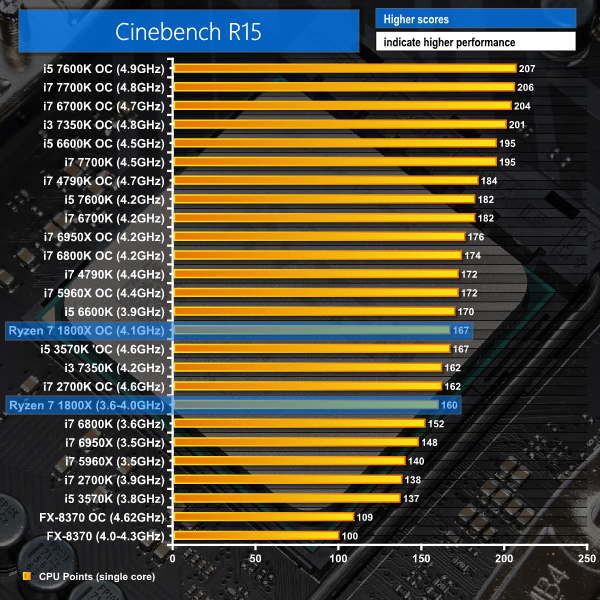 Talk about fast off the start line!

Cinebench is first up in our test suite and AMD’s Ryzen 7 1800X doesn’t simply enter itself onto the enthusiast consumer processor scene, it kicks the front door down. The 8C16T Ryzen 7 1800X is over 16% faster than Intel’s 8C16T Haswell-E based flagship from not-so-long ago.

Equally impressive is the Ryzen 7 1800X’s ability to maintain its positive performance when overclocked. The gap between itself and the stock-clocked 10C20T 6950X is reduced to around 3%, while the 300MHz higher-clocked Haswell-E Core i7-5960X can’t quite catch the 4.1GHz Ryzen 7 1800X.

Single-thread performance from Ryzen 7 1800X is better-than-anticipated. A 160 point Cinebench score puts it above Haswell-E single core performance from the 3.5GHz i7-5960X and places it roughly a little faster than Broadwell-E in terms of single-core numbers. Ryzen 7 1800X is helped by its boost speed of up to 4.0GHz when a low core count is active, which increases to 4.1GHz XFR for the Cinebench single-thread test. 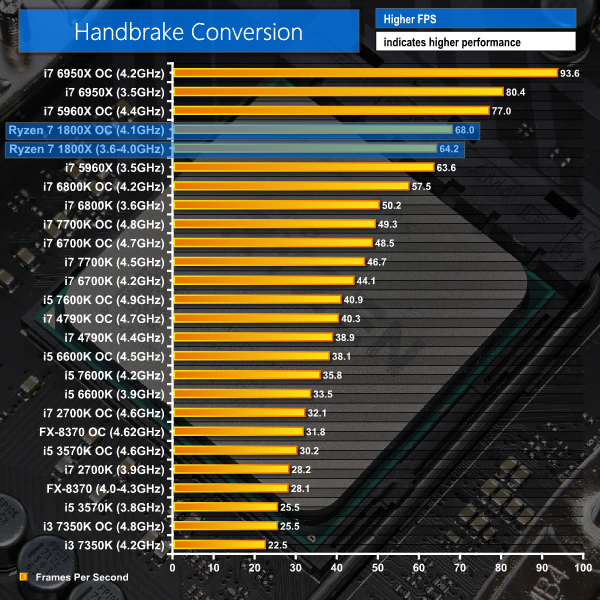 Handbrake conversion of an x264 video paints a similar picture to Cinebench rendering. This time, however, memory bandwidth has more influence on the result and the stock-clocked Core i7-5960X is able to more-or-less match the stock Ryzen 7 1800X performance. Handbrake gives an insight into the value of high bandwidth from quad-channel memory on Intel’s HEDT platform, as opposed to Ryzen’s dual-channel approach.

If you’re a media aficionado with a large Bluray collection ready to rip and convert onto a home media server, the eight-core Ryzen 7 1800X looks like a superb bang-for-buck option. 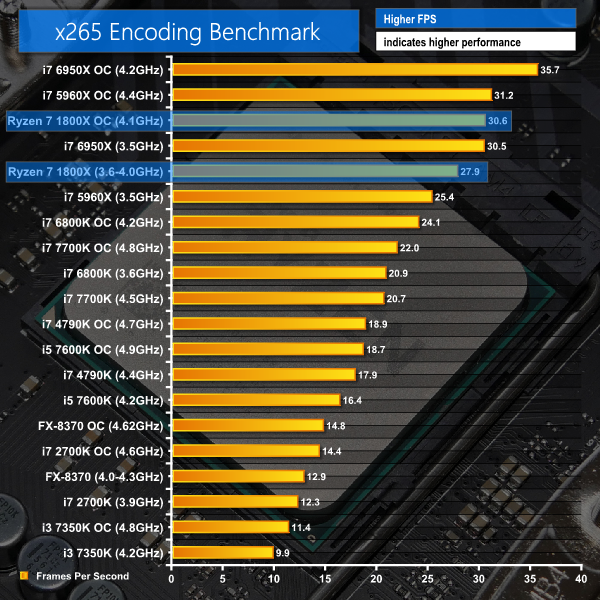 The x265 benchmark is slightly different to Cinebench and Handbrake as it does not saturate the full set of threads on eight- or ten-core chips unless an overclock is thrown into the equation. The data has to be sent fast enough for it to be split and divided up to keep all eight or ten cores fully active, and that’s where clock speed has value.

This is exactly what the chart shows. Stock-clocked Ryzen 7 1800X is faster than the 5960X thanks to its 200MHz higher all-core boost frequency. Overclock Ryzen 7 1800X to 4.1GHz and you have 6950X-matching performance. The catch here is that Intel’s chips will generally overclock to higher frequencies than Ryzen 7. As such, the 4.4GHz 5960X is able to take second place behind the overclocked 10-core 6950X.

Don’t fancy overclocking a £1,650 Core i7-6950X due to its extreme cost? If that’s the case, you’ll get better performance from a 4.1GHz Ryzen 7 1800X chip for certain x265 encoding workloads and will be almost level with the 10-core part for rendering, as suggested by Cinebench.

Single-core performance is also strong, though it certainly isn’t Skylake-level strong. Decent single-threaded performance is good to see as this has been AMD’s Achilles heel for past high-core-count chips such as those based on the Bulldozer and Piledriver architecture.