Initial guestimates relating to overclocking capability can be made by looking at AMD’s SKUs. The Ryzen 7 1800X is a 3.6-4.0GHz (4.1GHz XFR) flagship that costs $100 (£90) more than the ~200MHz slower Ryzen 7 1700X. That gives the indication that the 1800X is cherry-picked silicon that sits more favourably on a voltage-frequency curve and therefore commands a 25% price increase (consumers may disagree with AMD’s logic).

Having two similar SKUs operating at different clock speeds may imply that overclocking capability is going to be tight. If the CPUs generally overclock well, it would be unlikely that AMD would think a 25% price increase for a <10% higher frequency would be worthwhile as savvy consumers would simply buy the cheaper 1700X and push it to 1800X speeds (which may prove to be the case).

However, if strong overclocking performance is no guarantee, that 25% price increase for more golden silicon and slightly higher clock speeds seems like a more perceivable option. 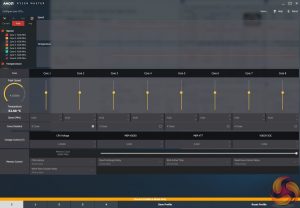 AMD has created a new piece of software – Ryzen Master – that allows the system to be overclocked from within an OS environment. I tested it out and it works well. Users can change CPU clock speeds in 25MHz increments, the memory data rate can be switched, cores can be disabled, and voltage adjustments can be made.

There’s also a good amount of information pertaining to temperature and clock speeds available. The settings are applied following a system reboot and up to four profiles (currently) can be saved.

Despite working well for overclocking, I found that the Ryzen Master software utility was using around 10% of the CPU cycles on a Ryzen 7 1800X CPU. As such, I quickly switched to the old-school BIOS approach for system tuning. 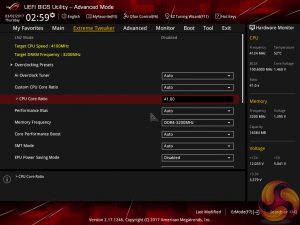 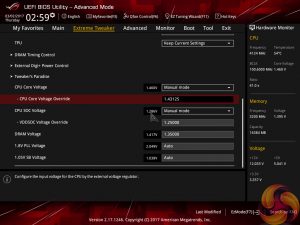 After many hours spent tweaking VCore, SOC, and NB (if available on the motherboard) voltages, I finally reached settings that I was happy to use to push the CPU frequency. Default voltage for manual tuning should start at around 1.3625V, according to AMD. Users should be fine pushing to 1.40V with a decent CPU cooler and up to 1.45V with a high-end dual-tower heatsink or dual-fan AIO radiator.

At 1.45V, AMD suggests that processor longevity could be affected according to their models. Temperatures, however, are not a limiting factor at this voltage, provided you have a Noctua D15- or EKWB Predator 240-calibre CPU cooler; we saw temperatures stay below 80°C under short periods of heavy load at around 1.44V.

Another factor that can aid stability is SOC voltage. We pushed this to 1.25V in our testing as there are suggestions that it can aid stability with high-speed memory modules. Using the MSI X370 XPower Gaming Titanium motherboard, pushing NB voltage to around 1.10-1.15V seemed to aid stability. This option was not clearly labelled in the ASUS UEFI and therefore could not be adjusted. 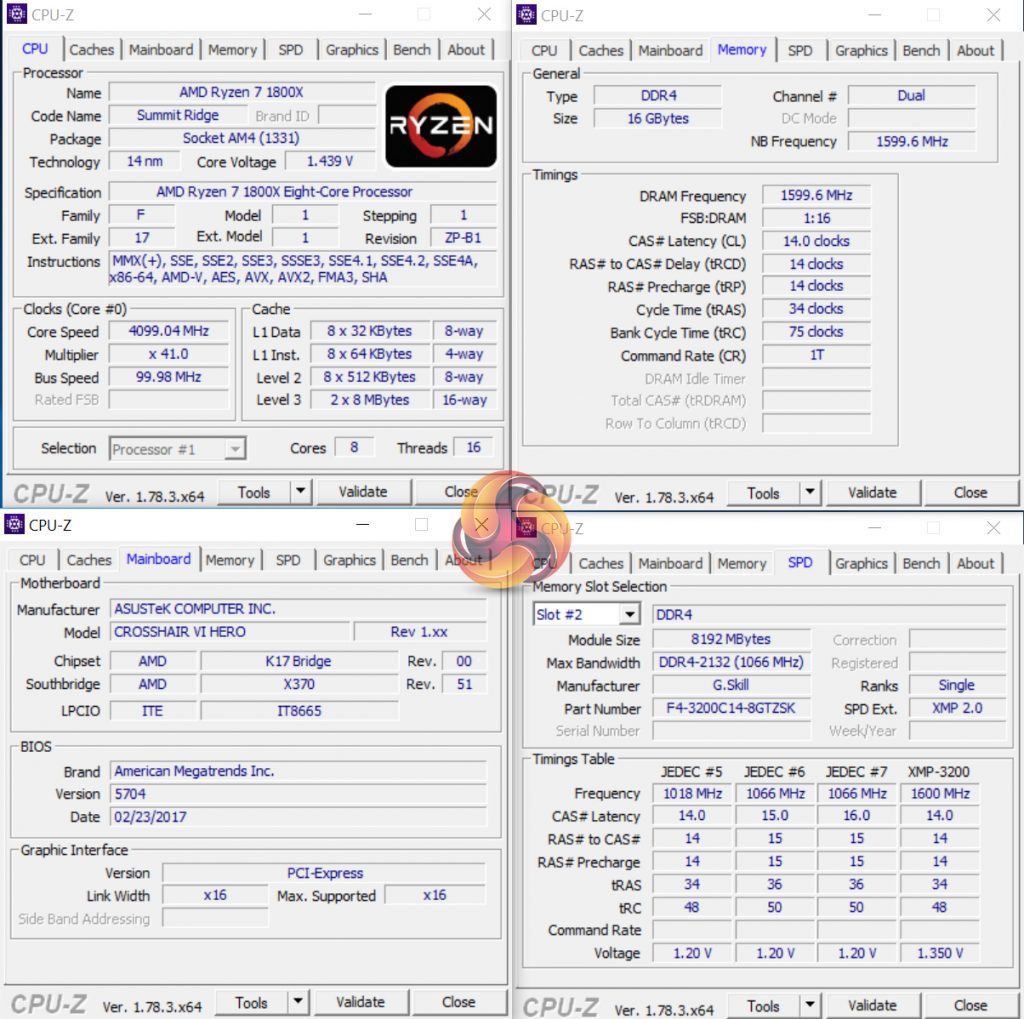 The highest Cinebench-stable processor frequency that we could achieve with all 8 cores and SMT enabled was 4100MHz. Frequencies such as 4150MHz and 4200MHz would boot into Windows 10 but could not retain stability under Cinebench loading.

4100MHz at ~1.44V load voltage was perfectly stable when using Cinebench R15 as the validity test. AIDA64 CPU stress test also validated stability. Prime 95 was a little flaky in some instances (it would sometimes drop a single-thread worker after a few minutes of sustained load) but the FFTs testing procedure is extremely strenuous on CPU stability.

We were able to keep the memory running at 3200MHz C14 when the CPU cores were overclocked to 4.1GHz. This is good as it results in a direct 400MHz boost over the default 3.7GHz all-core turbo frequency of the default Ryzen 7 1800X.

We tested a second, different Ryzen 7 1800X with the MSI X370 XPower Gaming Titanium and Gigabyte AX370-Gaming 5 motherboards. This chip was not as good an overclocker as our initial one. We were limited to 4050MHz Cinebench stable with this second Ryzen 7 1800X sample though this did allow us to drop the voltage down to 1.425V instead (we didn’t attempt lower), which is more sensible for long-term usage.

Rolling back the VCore even further to 1.40V netted us perfect stability (even with Prime95) at 4GHz on both the Gigabyte and MSI motherboards.

Based on our testing, in addition to other reports that we are hearing, around 4.1GHz should be considered quite a good overclock for a Ryzen 7 1800X CPU while limiting the voltage to 1.45V. Dropping down to 1.40V may force you to back off by around 100MHz to 4.0-4.05GHz. 4GHz on all eight cores with SMT enabled should be comfortable for many Ryzen 7 1800X CPUs.

There are suggestions that 4.2GHz should be achievable using 1.45V, though neither of the chips that we received were able to hit such levels. AMD also suggests keeping voltage below 1.45V (more towards 1.40V for long-term, 24/7 usage) in order to enhance processor longevity.

Barely crawling past 4GHz when over-volted may be seen as weak overclocking performance by some. That’s especially true when one considers that even Intel’s 10-core 6950X can push pust 4.1-4.2GHz comfortably, and you could almost guarantee 4.3GHz-4.4GHz on an 8-core i7-5960X. With that said, Intel also has significant experience with its FinFET process. Ryzen is AMD’s first enthusiast, overclockable chip using 14nm FinFET process technology so earth-shattering (or Intel-matching) frequencies may have been a little optimistic.

Nevertheless, 4GHz on an 8C16T processor is nothing to be underwhelmed by, especially not for a brand new CPU on brand new (for AMD) process technology. 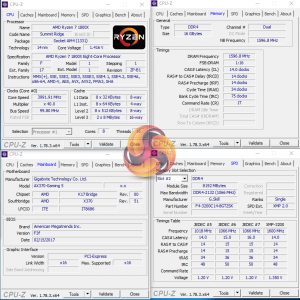 As already highlighted, we were able to use 3200MHz dual-channel DDR4 (2 single-sided DIMMs) with the Ryzen 7 1800X while at stock clocks and when overclocked to 4.05-4.1GHz. This was the case using the ASUS Crosshair VI Hero motherboard and when using XMP on the Gigabyte AX370-Gaming 5 motherboard.

We tried to push to 3600MHz using a built-in D.O.C.P setting for the memory frequency on the ASUS board. This ended very badly as the system tried to POST into a BIOS update mode (despite no update being initialised), at which point I had to kill the power which seemed to result in a bricked BIOS chip (not motherboard as the LEDs still worked).

As was the case when Intel launched Haswell-E/X99 and DDR4 was fresh out of the fabs, early compatibility issues with high-speed memory are commonplace. BIOS updates and better tuning from memory vendors are likely to improve the picture over time, though we certainly wouldn’t anticipate easily-achievable 4GHz+ Kaby Lake-esque memory capability from Ryzen in its current state.