Having a great chassis with plenty of airflow won’t help if your processor’s cooler is insufficient for the speed/voltage you choose to run it at. Most KitGuru readers will be running CPU clocks in the mid 4GHz zone. The more adventurous of you will be looking at – or possibly passing – the 5GHz mark. That’s a significant amount of heat energy to dissipate and you’ll want to make the best choice. Your options include liquid or air – as well as any budgetary concerns.

Overall CPU Cooler of the Year
From the first moment Cool-IT launched the affordable Domino liquid cooler, you knew the world would never be quite the same again. Sure, companies had manufacturing issues in the early days, but the technology has moved on and reliability rates are now generally excellent.

With a regular/air cooler, a system of heatpipes is used to draw the heat away from the surface of the CPU and onto a pattern of thin fins. Liquid coolers draw the heat away just as efficiently, but without the need to bolt a huge lump of metal onto your mainboard.

During the year, we have tested a variety of liquid coolers – arguably the best of which was the Cooler Master Nepton 240M. However, it lags way behind last year’s winner. Taking all things into consideration, the best overall cooler of the year must do just that: Be the best cooler.

Overclocking, under load, the Corsair Hydro H110 is a solid 3 degrees better than the Nepton 240M. It’s also the quietest of the liquid coolers we have tested. So, there you have it. It’s the coolest, quietest CPU cooler we have tested and it deals with heavily overclocked processors in its stride – and all for less than £90.

KitGuru’s choice for Overall CPU Cooler of the Year 2014 goes to the Corsair Hydro H110. Read the review HERE. 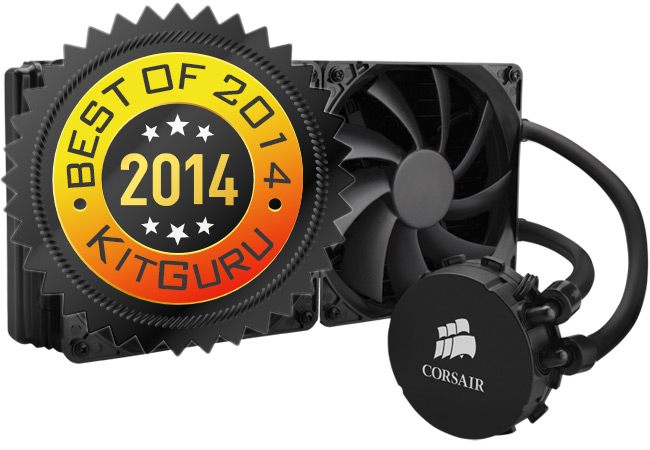 Value CPU Cooler of the Year
Value is a moving target. When we talk about a ‘Value Cooler’ here at KitGuru, we generally mean either (a) the first after market cooler you ever buy or (b) a cooler for a second system where cost is a big issue.

Sure, it doesn’t have to be less than £30, but a cooler that costs over £30 will have to be something very special to win a value award. OK, so those are the parameters, who are the contestants?

For most ‘enthusiasts of a certain age’, your first cooler would have been something like the Arctic Cooling Freezer 7 – so it’s good to see Arctic still delivering interesting cooling options for first timers. We also saw some excellent numbers from be quiet! products – but the price was higher and you’d need an amount of patience to fit them properly. In the final analysis, one cooler sat around the £30 mark, delivered impressive results and managed to get KitGuru Labs to list its faults as ‘None’.

Thermaltake’s Frio14 works with both Intel and AMD processors and, at the time of writing, was £31.

KitGuru’s choice for Value CPU Cooler of the Year 2014 goes to the Thermaltake Frio 14. Read the review HERE. 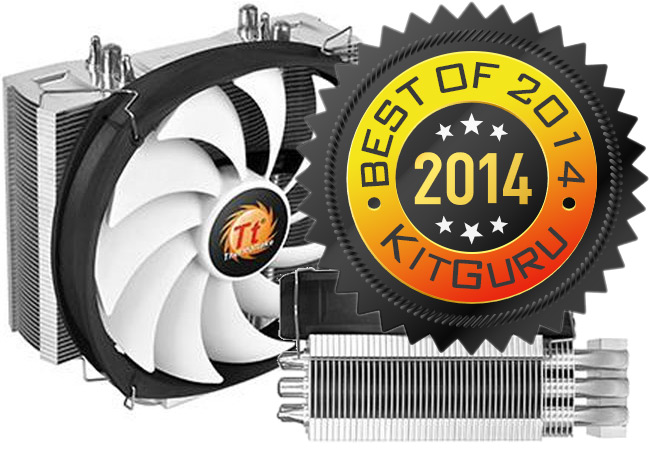 GPU Cooler of the Year
Cooling technology on graphic cards varies from ‘famously fantastic’ all the way down to ‘epic fail’. While the reference coolers on AMD Radeons generally leave a lot to be desired, they are fortunate to have partners like Asus, Gigabyte, MSI and Sapphire to help drive them forward.

For those among you who really want to go to town when it comes to GPU performance/overclocking, there is an entire manufacturing sub-culture dedicated to creating the perfect set of plates, pipes and radiators. Arguably one of the better cooling solutions to arrive in KitGuru Labs in 2014 belonged to the AMD Radeon 295X2.

Far from the usual disappointment, this unit left us pleasantly impressed and wondering why AMD doesn’t branch out more often. Seeing a pair of these inside an 8Pack special Overclockers Infinity Vesuvius QuadXFire system was something to behold.  Still, that’s one solution and not something you can readily buy in the shops for any card in the market.

The Arctic Accelero Xtreme IV on the other hand is a genuinely flexible £65 solution – with fitting options for a broad range of cards (although not the 9xx series – at the time we went to press).  In our tests, it took a whopping 39 degrees off a Radeon 290X under load – and it did so while whispering in at 6 dBa less.

KitGuru’s choice for GPU Cooler of the Year goes to the Arctic Accelero Xtreme IV. Read the review HERE. 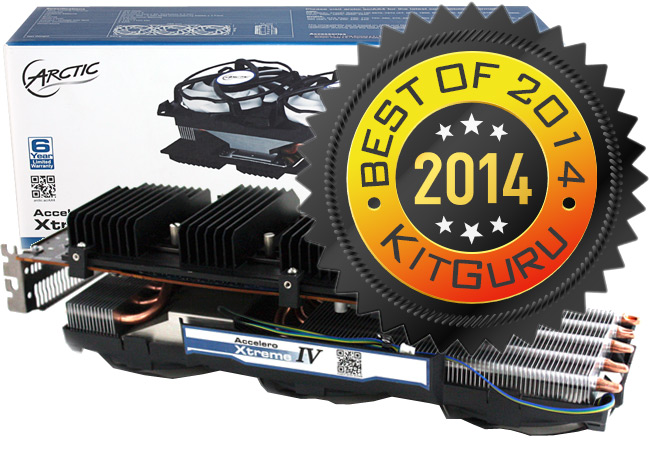