See me, hear me, touch me, heal me

When all is said and done, components have been analysed and compared, wish lists created and deleted on a dozen online stores and you've finally made your hardware buying decisions – then that PC is yours. It will work as fast as it works – and respond to commands/games etc in a very predictable way.

Sounds like a massive truism, and it is, but it's an important one. Once the dust settles, all KitGurus realise one simple truth: The keyboard, mouse and screen ARE your computer experience – the only parts that you ever really touch. how many of us have spent far too long trying to choose between memory modules or power supplies, then let far too little in the budget for the peripherals that will define our experience?

Don't worry, you're in good company, we're all as guilty as you.

Keyboard of the Year
We live in a world where a keyboard like the Razer Deathstalker Ultimate Elite keyboard can cost more than an entry level desktop or laptop. This is some serious engineering. We also know that Microsoft and Logitech's entry level kits cost less than £20. So, there you have it, a price span from £10 to £220 for a keyboard – but which one to choose?  One thing is for sure, the winner was very likely to be a mechanical keyboard. The more senior members of the KitGuru crew grew up when IBM-style keyboards were standard and we love em to this day. So which keyboards impressed us the most?

Logitech put in a good effort with the G910, which featured Romer-G switches that are supposed to react 25% faster then Cherry, but – in the end – the key shape, layout and price issues were too much. Asus launched the Strix Tactic Pro keyboard with Red Cherry MX switches, which was a good effort as well, but at £100 had too many niggles to take top spot. Which brings us to the Corsair Gaming Vengeance K70 RGB.

Once again, we're seeing the cross-branding taking effect – with the momentum originally generated around the TwinX low latency memory modules now being brought to bear on gaming peripherals – and to good effect. Its Red Cherry MX switched are housed in a brushed aluminium body , with cut-out translucent lettering that will never fade. At a smidgen just under £150, you'll want it to last a long time – and it should. This is a quality product.

KitGuru's choice for keyboard of the Year 2014 is the Corsair Gaming Vengeance K70 RGB. Read the review HERE. 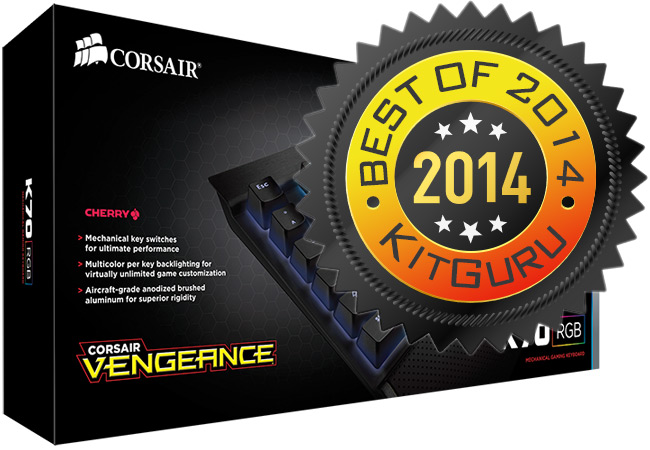 Mouse of the Year
Once upon a time, companies would specialise. Case makers made cases, power supply companies made PSUs and mainboard companies made, well, motherboards. Arguably the past-masters of ‘positively moving a brand from one area of technology to another' was Corsair but, these days, they have some stiff competition from Asus and Kingston.

The real issue for everyone else is that not only has Asus managed to move its brand equity from motherboards to laptops to monitors to gaming gear – but it is managing to charge sensible money in each area. the additional cost that people seem willing to pay for Asus kit means that the company has more to invest in research and development – and then marketing to tell the world what they are doing. This is not a cautionary tale as much as an admission that Asus has done a great job.

When we analysed all of the mice that we had seen in 2014 (but ‘solo' and as part of systems), a £65 model from the Republic of Gamers team within Asus stood out. Jon was extremely thorough when putting it through its paces, yet the ‘Cons' at the end of his review of the Asus ROG Gladius gaming mouse, were all focused on side issues like ‘Could have been a little cheaper', ‘might have had a few more customisation options'. All of the ‘Pros' centred on how it performed in a serious gaming scenario, ‘Smooth, accurate and with high build quality'.

KitGuru's choice for Mouse of the Year goes to the Asus ROG Gladius. Read the review HERE. 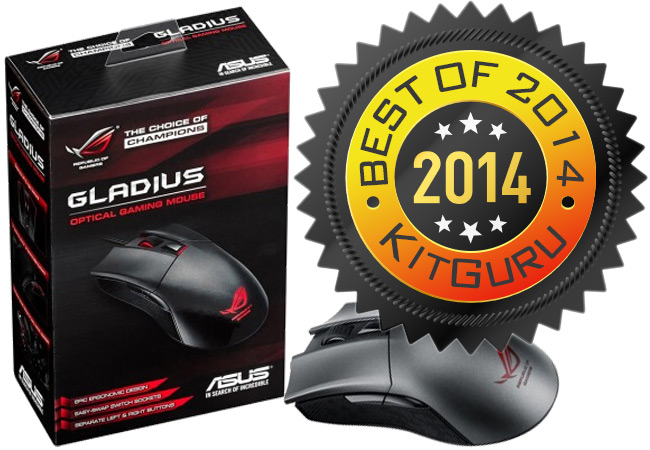 Headset of the Year
If you thought that mainboard specialist Asus winning Mouse of the Year, then hang on to your hats for our choice of Headset of the Year. Twenty two years ago, a hardcore gamer called Christer Kornback from Stockholm decided to invest his resources into making better game pads. His company is called Qpad and it produces a range of respected gaming products. A few years back, Kingston decided that it had enough presence in the corporate sphere and needed to take a bigger stake in the gaming market.

HyperX was built up as a brand, with new products being added all the time'. The problem is that no matter how well you do with a memory-based product, your branding is inside the PC chassis. Kingston's solution includes adding gaming peripherals like the Kingston HyperX Cloud Gaming headset at £65. Partnering with Qpad seems to have paid big dividends, giving Kingston a headset that it can be proud of – with excellent sound quality and focused dynamics, even at high volume. It also boasts solid build-quality and compatibility with all of the major consoles.

KitGuru's choice for Headset of the Year 2014 goes to the Kingston HyperX Cloud Gaming Headset. Read the review HERE. 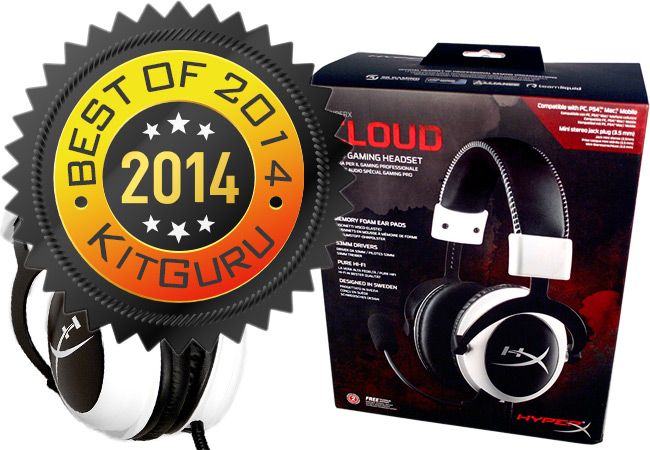 Speakers of the Year
We live in an increasingly singular and separated world. As kids, we would blast our record players/tape players/music centres and really annoy the neighbours. now we annoy our travel neighbours purely with the squeaky noise of our headphones. But it can feel restrained. Sometimes you want to let rip – Marty McFly style – and that needs speakers. At KitGuru, we have seen everything from stylish little multimedia speakers that will simply boost the kind of standard audio that a TV etc might offer – right through to some cracking units closer to £200.

For the last two years in a row, our winner came from Wavemaster, with speakers like the Stax 2.1 around £59 and we gave serious consideration to Edifier's 980T 2.0 speakers at £50. But this year's winner is actually from a different class altogether. While Henry prefers a set of speakers with a separate sub-woofer and was concerned that the winning units could be knocked over if your arms started to flail during a particularly hardcore Gothic track, in reality the Edifier Luna Eclipse e25 2.0 speakers deliver great sound quality – which has to be the ultimate measure of an audio product's success.

The fact that they deliver plenty of volume, clarity and input options rounds off this choice perfectly at the £144 mark. But there lies the problem. With the Microlab Solo 8C speakers at a much higher price over the summer, it looked like Edifier would edge the award, but Overclockers now have the Microlab Solo 8C units at just £115, which makes them clear winners.

KitGuru's choice for Speakers of the Year 2014 goes to Microlab Solo 8C 2.0. Read the review HERE. 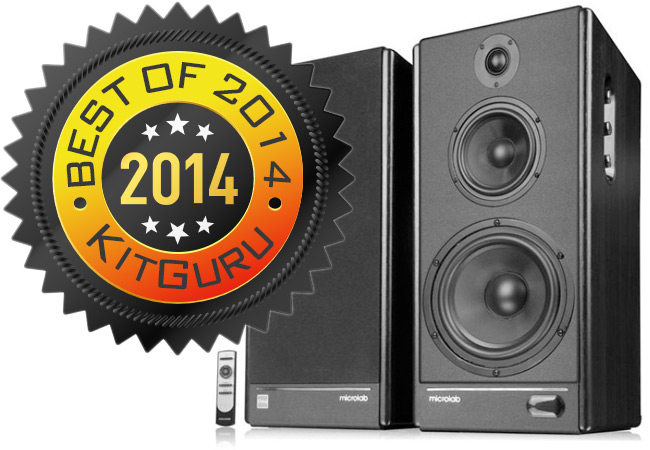