The Witcher 3: Wild Hunt concludes the story of the witcher Geralt of Rivia, whose story to date has been covered in the previous titles.[3] Continuing from The Witcher 2, Geralt seeks to move on with his own life, embarking on a new and personal mission while the world order itself is coming to a change. (Wikipedia).

We test with graphics settings on ULTRA and postprocessing on HIGH. 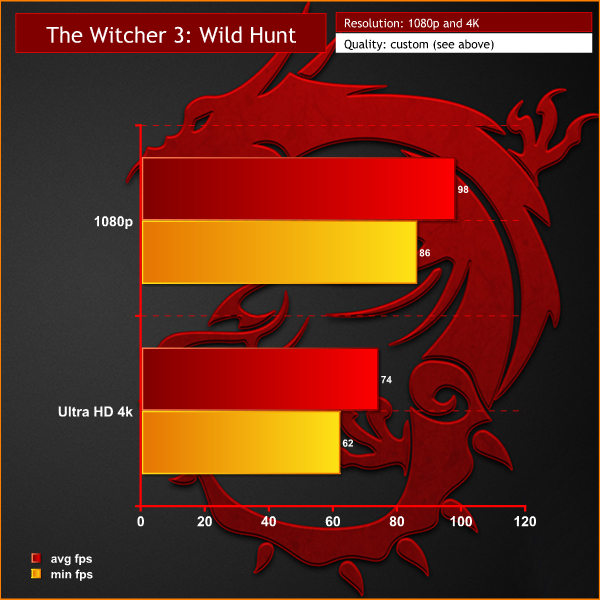 1080p performance is excellent, however the game really comes to life at Ultra HD 4k resolution. We tested with an external 4k monitor and achieved frame rates over 60 at all times. We noticed, in a similar fashion to the Grand Theft Auto 5 testing earlier that there is some CPU limiting at 1080p.

Ed.: We have conducted a significant amount of testing with Witcher 3 using desktop CPUs, and have found it to be particularly taxing on the processor. Interaction with NPCs in densely-populated regions of the game can present a situation where the CPU is heavily loaded whilst simulating the behaviour and physics interactions of these NPCs.

Put simply, at 1080P resolution you will hit a frame rate limit that is more closely tied to the CPU than the pair of (significantly) overpowered GTX 1080 GPUs. Using an external, higher-resolution display rapidly swings the emphasis back onto all-out GPU performance, and the CPU is better suited for feeding data at the slower rate commanded by the increased frame times from the GPU working at 4K.