MSI’s default install is a little bloated – we are never pleased to see either McAfee or Norton installed on a new system; we would much rather have the option to install our own anti virus and security software.

We also noticed some performance issues with the Windows 10 ‘Defender’ software after the Anniversary update was installed – it would randomly hog up to 30% CPU time. I found it problematic getting accurate CPU results with this software running at all, so we permanently disabled it using a REG file – you can read more HERE.

Despite CPU-Z showing a maximum multiplier of 41x, Intel XTU indicated that the system was running at the default 6920HQ CPU speeds. We did extensive testing to see if there was any situation where the laptop would use a CPU speed of greater than 3.8GHz (as indicated by CPU-Z), but as soon as a load is applied, the CPU speed behaviour is identical to that of Intel’s default Turbo Boost speeds for the 6920HQ. 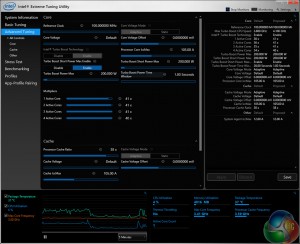 This was further validated by Intel XTU recording a maximum CPU core frequency of 3.5GHz when a 1-core Cinebench workload was applied.

We love the fact that the latest mobile Pascal hardware doesn’t need specialised mobile drivers. You can simply install the latest desktop GTX1080 driver to stay updated. We tested with Forceware driver 372.90 installed.

The laptop is equipped with the locked Core i7 6920HQ processor, one of the fastest Core i7 mobile chips in the latest Intel range. I would prefer to have the 6820HK in this system as it is unlocked and can be easily overclocked to a solid 4GHz. MSI actually include the 6820HK in their GT73VR range of laptops but not in the flagship range.

Even though the MSI GT83VR 6RF is limited with the 1080p resolution panel, we hooked the laptop up to an external ASUS Ultra HD 4K monitor – to test higher resolutions. It is worth pointing out that you can also set up higher resolutions than the panel supports in the Nvidia control panel. Sometimes setting a 1440p resolution, for example, and running it via a 1080p panel looks better than a native 1080p rendering – to my eyes anyway.

If you want to try this for yourself, head to this page for step by step instructions.

All the latest BIOS updates and drivers are used during testing. We perform generally under real world conditions, meaning KitGuru tests games across five closely matched runs and then average out the results to get an accurate median figure. If we use scripted benchmarks, they are mentioned on the relevant page.