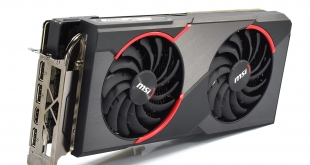 Today we are back with another RX 5600 XT review as we assess the MSI Gaming X model. Despite this card receiving a new BIOS update to improve GPU clock speeds, unlike the other two 5600 XT cards we have tested, the Gaming X’s memory still runs at 12Gbps instead of 14Gbps. How much of a difference does this make when gaming, and is the card still worth buying?

Regular readers may recall news emerging about the MSI RX 5600 XT Gaming X, when MSI revealed in a livestream that not all 5600 XTs can run the memory at 14Gbps. I’ve since had further discussions with MSI about this, and they explained to me that based on their own internal testing, they cannot guarantee that all 5600 XT Gaming X cards would be stable with 14Gbps memory. Therefore, with the card’s BIOS update, only GPU clock speed has increased.

That said, there is a chance that users who buy a Gaming X will be able to run 14Gbps no problem. As we will see later on in this review, I encountered no issues manually overclocking from 12Gbps to beyond 14Gbps. It seems to be somewhat of a ‘silicon lottery’ as to which Gaming X’s can or can’t hit the higher memory clock, but considering MSI can’t validate 14Gbps for all its cards, it makes sense that memory speed has been left alone.

To ensure that MSI does have a card that can run at 14Gbps, the company will be shortly releasing a RX 5600 XT Gaming Z model, which guarantees that faster memory speed out of the box. According to my conversations with MSI, this will be exactly the same cooler and PCB as the Gaming X, only it will be validated for 14Gbps memory. Again, this brings us back to the point that some Gaming X cards out there will handle the higher speeds, and some of those will now be designated as a Gaming Z.

The downside for the Gaming X is that its specifications don’t match that of other RX 5600 XT cards, like the Sapphire Pulse or Gigabyte Gaming OC. Accordingly, we expect the card will run slower than those models in our tests, but by how much? Let’s find out. 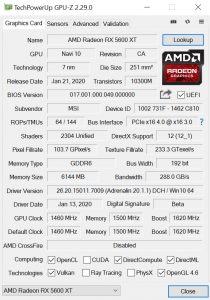 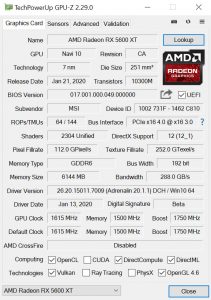 Just to confirm the changes made by the Gaming X’s BIOS update (available within MSI’s Dragon Center utility), memory speed remains unchanged at 1500MHz (12Gbps.) GPU speed, however, has increased from 1620MHz boost to 1750MHz boost, with the game clock now sitting at 1615Mhz which is up from 1460MHz.